Is Robinhood the correct name?

I don’t want to get into too much detail about the war between a hedge fund (Melvin Capital) and the Reddit users #wallstreetbets. It’s been written about plenty, and we invite you to reach out if you want some help understanding what it is you’re reading (or check out this nice synopsis by the very trusted Steve Blumenthal). Let’s instead look here at the players in this saga and see if we can figure out any motives and if they have any broader ramifications.

I guess the whole idea of Robinhood is to take from the rich and give to the poor. In relation to Robinhood the trading app, it’s giving market access to small traders with no trading fees. That sounds good on the surface, right?

So, let’s dig into that a bit more and then we can zoom back out to look at the bigger picture. About a year ago, there was a lot of pressure from the likes of Robinhood to lower trading costs on stock transactions and many large brokerage firms (Schwab and Fidelity to name a couple) lowered their transaction costs to zero in order to compete. Our clients were certainly beneficiaries of zero transaction costs. Shhh, let me tell you a secret…

The dirty little secret is that most of these brokerage firms make a lot of their trading money on Payment for Order Flow (PFOF). WHAT!?! I’m outraged! Who do I call to complain? Wait, I don’t even know what selling order flow means. Exactly…  When an order is entered to buy or sell a stock, that order is then routed to a market maker – for a “fee”.  In exchange for that fee, these market makers get to see what is being bought and sold. Pretty valuable information, right? Valuable enough that the SEC went after Robinhood last year for their alleged shortcomings in this arena – a case that was settled for a cool $65 million.

In case you think these payments are small, those fractions of a penny add up over time (reminiscent of the classic movie “Office Space”). Below is how much some of the online brokerages received for the first half of 2020. As a side note, you will notice that Fidelity is not listed below and that is because Fidelity does not sell its order flow. 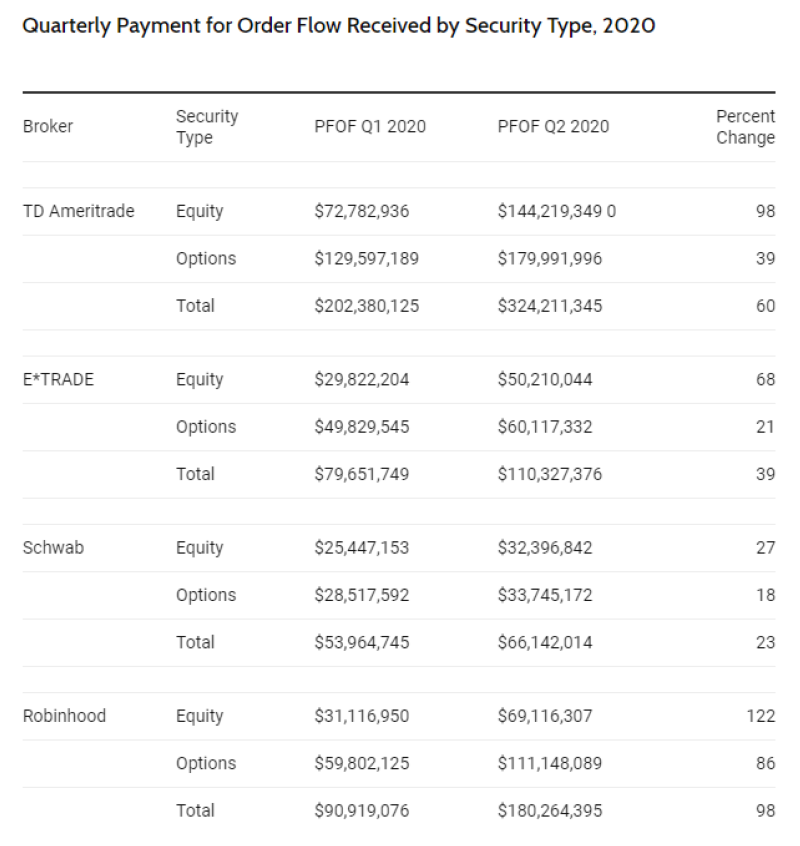 There are a couple things to note here. As a part of Schwab’s overall revenue, PFOF is a pretty small amount. However, they recently bought TD Ameritrade, so you need to add that to their totals going forward. Again though, probably a pretty small percentage of their revenues. Let’s get to the interesting part, and that’s Robinhood. Now Robinhood is a different story. It’s difficult to get hard numbers since Robinhood is a private company (for now), but PFOF likely accounts for more than 40% of it’s revenue. Well that sounds like a big number.

Let’s talk about the other side of this “war” going on between “small investors” on Reddit and the big hedge funds. The hedge fund that is most in the news in regard to GameStop is Melvin Capital.  They were “short” GameStop stock (which is a bet the stock price will go down). The unfortunate part of shorting a stock is your gain is finite (stock price can’t go below zero), while your loss could be infinite (stock price could go up unlimited). So when the Reddit group starts to buy GameStop and push the price up, that “poor” hedge fund starts to lose money (note sarcasm here). Rumor has it that Melvin Capital lost about 50% of its assets in the month of January (roughly around $6 billion). But wait, there’s more… 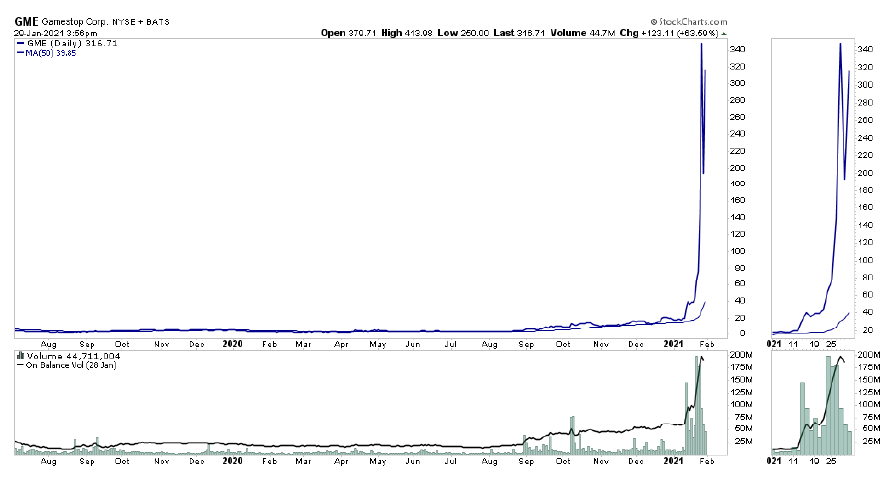 Melvin Capital needed an infusion of cash to shore up its finances (losing $6 billion will do that). Guess who it got an infusion of $3 billion from? Citadel and Point72. Okay, so I don’t know who those companies are…  Let’s start with the easy one first.

Point72 is the private equity/hedge fund firm owned by billionaire Steve Cohen. Yes, the same Steve Cohen who just bought the New York Mets and is the same Steve Cohen whose previous firm SAC Capital pleaded guilty to insider trading and paid a $1.8 billion fine and couldn’t manage outside money for two years. It just so happens that the CEO of Melvin Capital used to work for Steve Cohen before he started his own shop.

So, when you hear about the “poor” hedge funds losing billions of dollars, and Robinhood restricting transactions in specific stocks that are heavily shorted, you wonder the motivation behind those decisions. Time will tell. It usually does.

For the record, I have no information on the inner workings of these companies nor any of the interrelated business arrangements, but the idea of the little retail investor sticking it to the big hedge funds brings a smile to my face. Take a look at the next graph. For 30 years all the gains in wealth have accrued to the top 10% and virtually nothing to the bottom 90%.  That is a condition that cannot persist. 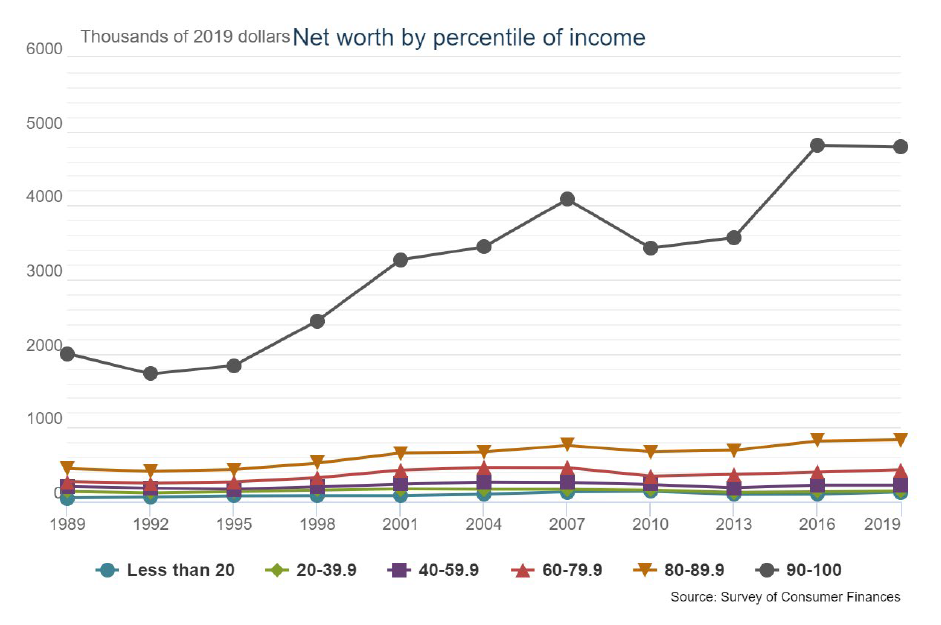 Are the markets rigged? Are these big players all in it together and working together? I have no idea. Is Robinhood looking out for the little guy or using the little guy to get to the real prize, PFOF? At one point last week GameStop stock had 140% short interest, which means there were 40% more shares “short” (betting on it going down), than actually existed. Don’t get me wrong, short sellers have a place in the market and serve a valuable function, but I didn’t even know it was possible to short more shares than there were issued. That’s the real issue in my book. If regulators want to come in and look at things, that should be the first place they should look.

This of course is just one example of what we have been talking about recently with margin debt at all time highs, speculative options at never-before-seen levels, and even fund managers with one of the lowest cash levels in history. Does this spell doom for the market? Doesn’t have to, but if everyone starts to run for the door at the same time, watch out!

You may have your own opinion. For me, I’m glad we are not in the middle of most of this and I will grab my bucket of popcorn and enjoy the show.

We hope you continue to stay healthy and social distance while the vaccines are administered over the next several months.  By the way, two more vaccines had good/excellent results last week. We should be seeing five vaccines in the marketplace soon. Then maybe we can start to get back to something more normal. Take care and talk to you next week, where we’ll be looking at another financial planning topic that we hope you’ll find interesting and useful.