As we look forward to the FED meeting on Wednesday, the evidence continues to build that the economy is in a precarious position. High inflation, slowing growth, rising interest rates, and low unemployment. Something must give.

Slowing growth and rising rates? Tough combination. Low unemployment combined with rising rates, makes sense, even throwing in high inflation. As we’ve said many times before, when the only tool you have in your toolbox is a hammer (interest rates), every problem looks like a nail.

Keeping interest rates at zero for a couple years, when the economy was opening up made no sense.  Putting (and keeping) $7 trillion into the economy made no sense. We’ve said this before – some of that could have been understandable and necessary, but a sum of $7 trillion was irresponsible. I think we can finally put Modern Monetary Theory (MMT) in the round file where many other ridiculous economic theories reside. After all, inflation is always and everywhere a monetary phenomenon, as my good friend Milton Friedman said.

Now the Federal Reserve is unwinding their previous mistake. As fun as it was on the way up, it will be equally as unfun (if that’s a word) on the way down. Those in ‘buy and hope’ portfolios will be in trouble. Those that were conned into leveraging things, many will be forced to deleverage and sell at lower prices. And the nasty side effect of all this will be all those unfilled jobs will disappear as businesses tighten their belts as profits are squeezed and stock prices come down.

Not a pretty outlook, but please remember that this is a cycle just like many in the past, and it too will pass. Just ask Jeff – he’s been at this since before some of you were born. That lived experience means something in an environment like this. We will all come out on the other side, and our job is to help you all come through still invested and with your financial plans still solidly intact.

As we do look ahead, let’s look at a couple things. We’ll start with the very near future, as in this week with the upcoming FED meeting. There is basically a 100% chance of a 0.50% rate increase. That is baked into the cake (see the chart below). 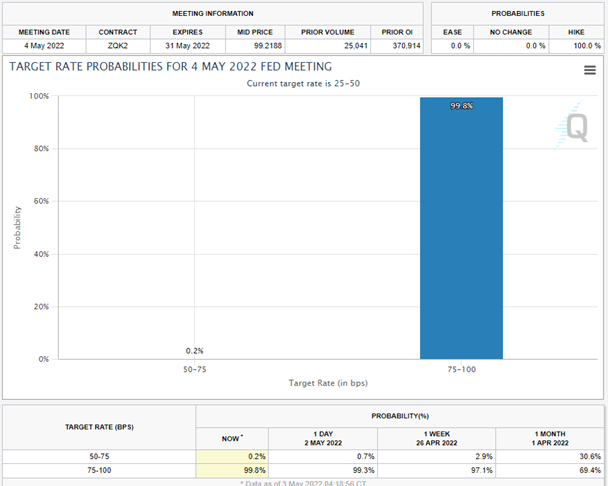 If that’s all but given, we can turn now to the months ahead. The bigger issue is the amount of rate increases that are already priced into the market through July. It’s staggering. 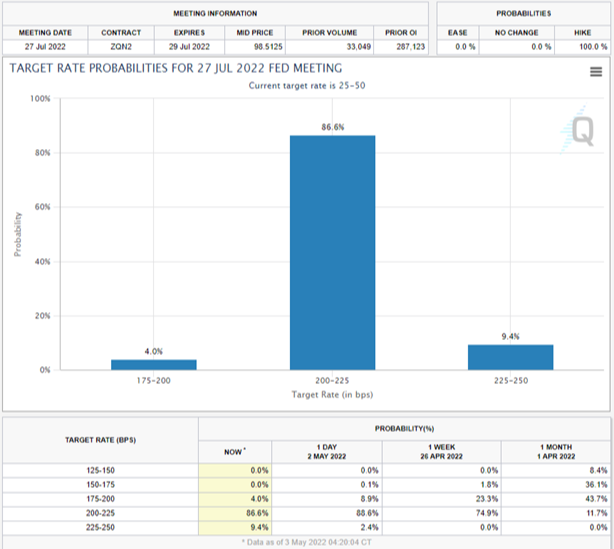 The market is basically pricing in an additional 1.25% in June and July after the May meeting. If we look out to the end of 2022, we see markets have priced in FED funds rates between 2.75% and 3.5% (see below). 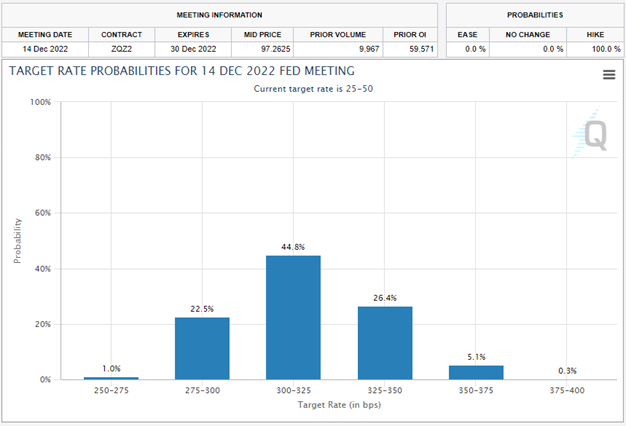 I sound like a broken record, but I believe that IF the FED follows through with these rate increases, we will end up in a bad recession. Of course, only to be “bailed” out by the FED again.

But what if the FED has been talking tough about raising rates, so the market will do their work for them and raise longer-term rates, thus slowing consumption across the board? If that’s the case, is it possible that all these rate hikes won’t happen?

Markets have repriced longer-term interest rates. Mortgages are solidly above 5% now and have already started to dampen the housing market. See existing home sales data below (keep in mind, this is for March when rates were much lower).

Like I’ve been saying, the language coming from the Federal Reserve in the next couple meetings will be crucial to where this economy will go. I for one would love to stop talking about the FED and monetary policy and get back to true price discovery and companies that add value to all of our lives. Those will always be the winners. Don’t you long for the day when we don’t know who the FED Chair is? I know I do!

So, if we go from bad, to not quite as bad, what happens to the markets? Well, we think that in many ways, some of these hardest hit areas so far this year will be the best performers going forward. We believe that technology will add tremendous value to our lives and the pace of that change is moving faster. That will not stop, regardless of what the markets and the economy do. Patient investors in that space should be handsomely rewarded, in our opinion.

What would ‘not quite as bad’ look like? I’ve been doing a lot of thinking about this and was trying to figure out what could cause sentiment to get less bad. I was doing some research last night (Jeff and Andrew can vouch for that as they endured my late next text parade) and came across something that I think would do it. What if we were at ‘peak’ inflation right now and that fear started to subside? What would that do to interest rates? We’ve seen the 10-year treasury hit 3% a couple times lately. Is that the market saying it won’t push the 10-year past that level because inflation is peaking? Check out the 10-year treasury chart below.

What if the 10-year treasury starts to head back down to 2.5% because inflation has peaked? Would the FED keep raising rates like discussed earlier? They’d be foolish to, but like my momma said, ‘stupid is as stupid does’. Ok, that’s Forest Gump’s mom.

I don’t pretend to KNOW the answers, heck I can barely figure out the questions. But if little ol’ me can see this stuff, surely somebody as great and powerful as the FED Chair and his mighty team of PhD economists can see that as well. Maybe he is playing 3D chess, while the rest of us are playing checkers. Boy, would I love to believe that.

But just maybe the sentiment can go from BAD to just bad. Then again, hope isn’t a strategy. Neither is fear, to steal a line from one of our research partners today. Our model continues to get more conservative and higher quality. Bonds have performed as bad as stocks this year and cash is earning zero. Commodities have been the only place to hide, but how much of your portfolio do you want in commodities? I think we’ve reached our limit of comfort.

As uncomfortable as pullbacks in the market are, they come with the territory. A market that can’t go down is a market that can’t go up meaningfully. All long-term investors have to be willing to endure some volatility. The question is “how much?” Like we’ve always said, if you’re losing sleep because of volatility, then you’re taking too much risk. If you are recently retired and your ‘employed’ allocation is now causing sleepless nights, maybe it’s time to review that. It’s ok, things change. We’ve found that newly retired people are more focused on market pullbacks than during their working career.

Let’s set up a time to discuss things in more depth. The good news about rising interest rates is you will be able to find a place for your “safe” money that actually pays you something. We’re happy to help you explore those options and their implications. Have a good week and please do reach out with questions, comments, or concerns.