I don’t mean to use common sense

The above headline was from NPR yesterday when the bill passed. The bill is called:

Now, I don’t mean to point out the obvious, but how does spending reduce inflation? So let me try to understand this. Inflation is currently at 40-year highs (mainly because of massive government spending from COVID) as well as the Federal Reserve policy of keeping interest rates a zero for WAY TOO LONG. So now the answer to spending too much money during the pandemic is to introduce (and pass) the $700 billion “Inflation Reduction Act?” Proof that you can’t make this stuff up.

Now don’t get me wrong, I was waiting for the tax credit to buy a new EV, and this played out perfectly for me. But should we be incentivizing EVs when manufacturers can’t make enough of them as it is? It only creates more demand at a time when supply is constrained. You think that will make that demand/supply better or worse? I think we know the answer to that.

So to call this inflation reduction is amusing – and disheartening. Note this not a commentary on the bill itself. You can judge the contents on your own. It’s more a commentary on lack of honesty when it comes to naming legislation these days! Trust me, I would love an inflation reduction act. I just don’t think we’re getting one here, and we’ll see in a minute why this may matter for the markets (which is what we’re after in this blog).

Before we get on to today’s business, I wanted to pass along some sad news. Not many of you may have known him, but in the Seattle tech community, there were none bigger. From Amazon to McCaw Cellular, Tom Alberg was a massive contributor to the foundation of technology that the Northwest enjoys today. We send our thoughts and prayers to all his family and friends. He will be missed. For those wanting to read more, click here.

Now on to the real business of the day.

We have been saying that the markets were oversold and due for a bounce, thinking that there was a good chance we could get back to the 200-day moving average. Let’s look at some charts. 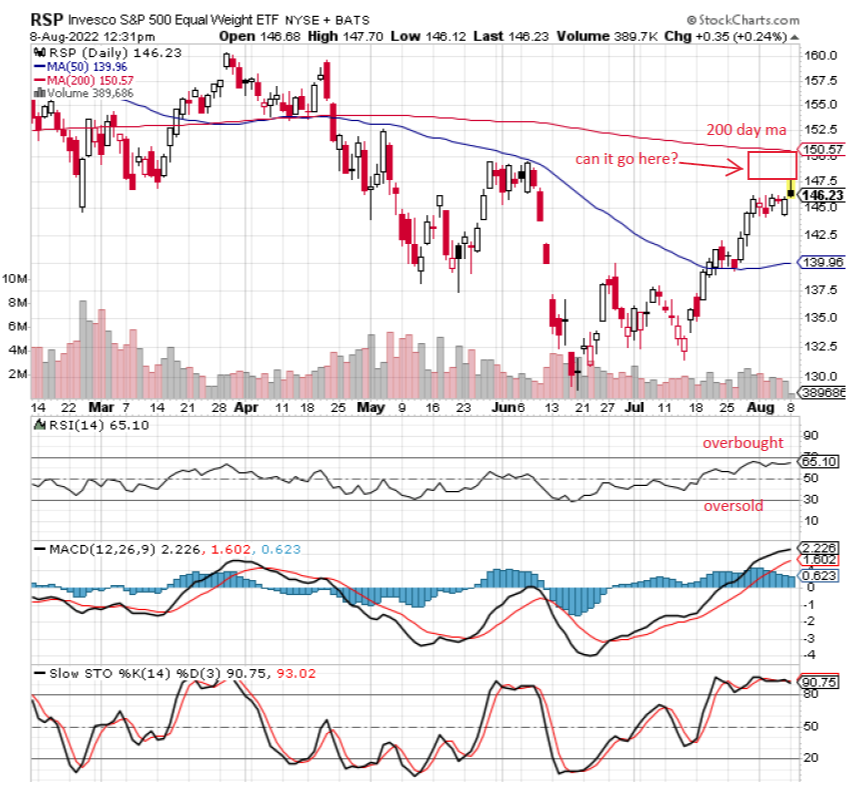 You can see above that the market has worked its oversold condition off and now sits close to overbought (too much buying in the market). Could it run a little further? Sure. Nobody has a crystal ball and we’re just trying to put the puzzle together. Let’s look at a longer-term chart. Below is a weekly chart of the S&P 500 equal weight. You can see that things are a little less overbought and show some room to run. We will see how things play out the next couple weeks. 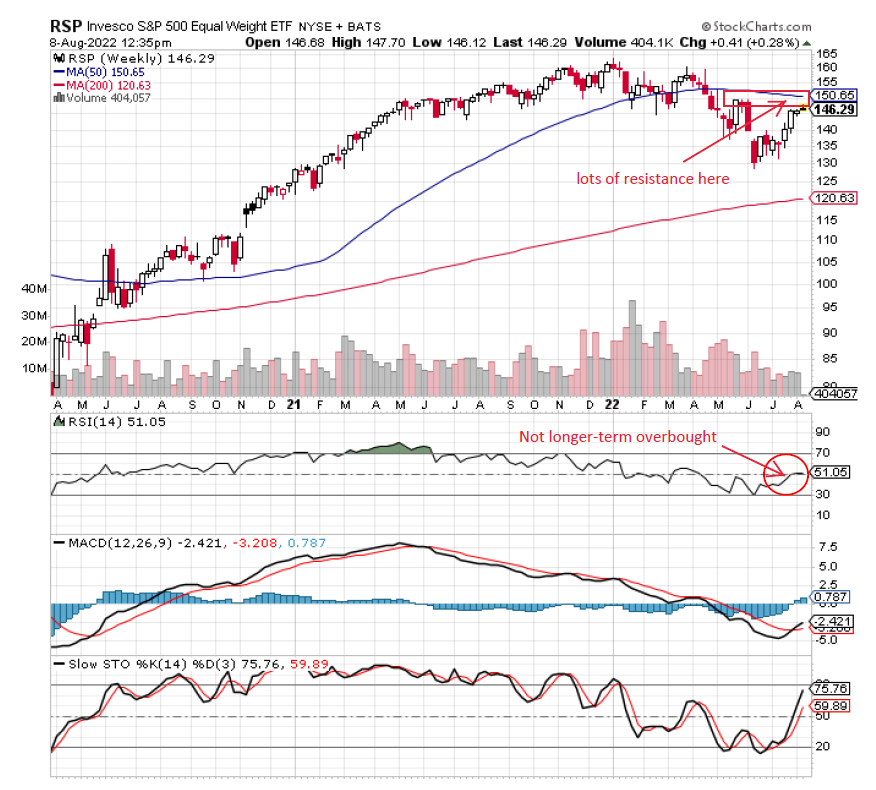 Next is Cathie Wood’s ARK Innovation fund (ARKK). After bottoming in May, and retesting that bottom in June, her fund is now up 45% from that low. It is sitting near some resistance, so if it goes through that we will likely see a run to the mid-sixties. If it gets rejected, it will likely coincide with the broader market selling off. 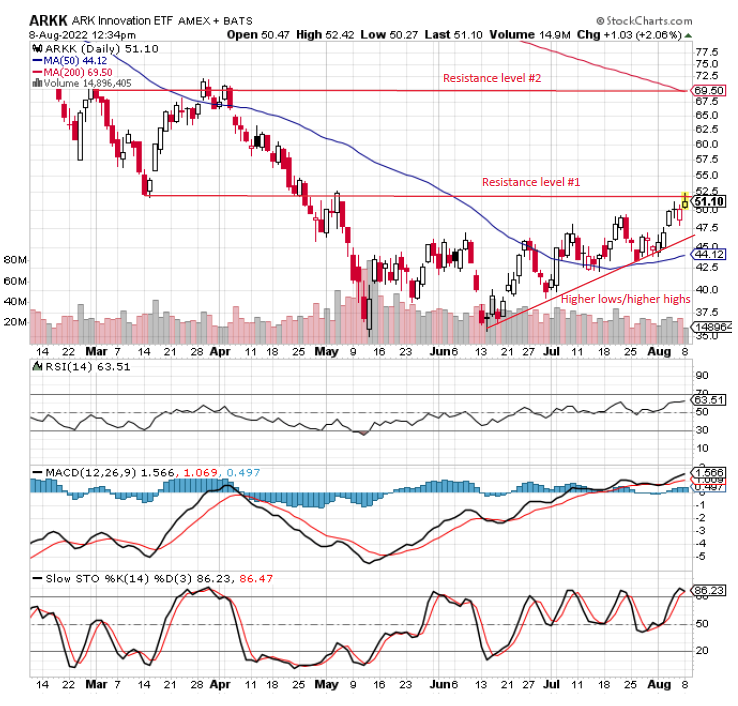 It is interesting to note, for those of you who read the linked piece on Tom Alberg, technology investing takes very long time horizons and a lot of patience. But if you have those, some of that technology will dramatically change lives. We very much look at Cathie Wood’s innovation funds as that type of investment. Not fun when it goes down, but a necessary evil if you want to have a small part of your portfolio in technologies that we will take for granted 10 or 15 years in the future.

In other news that could move markets, the BLS released nonfarm payrolls for the month of July.

Keep in mind that the FED is trying to slow the demand side of the equation so that inflation will come down. It’s very difficult to achieve that objective with a jobs report like this. Normally, that number would be good, but in this inflationary environment, they are looking for jobs to weaken, not get stronger – especially to the point of unemployment hitting 50-yr lows! That will likely reinforce higher interest rates in September.

This week we will get July CPI and PPI inflation numbers. We will likely see a dramatic decrease in inflation for the month of July, largely due to energy costs.

The issue for the FED is slowing demand without killing too much of the economy. If that’s achieved, that would be considered a ‘soft landing.’ If not, we are in for quite a recession. The jury is still out on what type of recession we will have. The market is a discounting mechanism. It looks 6-9 months in the future. Is this rebound in stocks just a pause before the next leg down (which would signal a significant recession still looms) or is it the start of a new bull market (which would signal a mild recession, perhaps one that is already underway)? Opinions vary on this subject (significant understatement!). What we do know is the new “Inflation Reduction Act,” for whatever you may think of it, will do nothing to help the FED reduce inflation in the coming months and may actually make things worse. We shall see.

That’s it for this week. We are in the summer doldrums as far as the markets are concerned. Reach out if you have any questions about the market of larger planning issues. We’re happy to chat! Otherwise, have a great week!