As we come into the last week of the year, many traders have made their year-end adjustments and the stimulus bill was signed (finally), leaving us now to just hope that there are no (proverbial) fireworks planned for the end of the year.

Virtually every research partner we trust have said the markets are overvalued and stretched in the near-term. We have certainly shown some of these charts over the last few weeks and months. That being said, the market continues to climb a “wall of worry” and it seems like the path of least resistance is higher for now.

Yes, we’ve trimmed some of our ARKK position last week to get back to our target allocation, and why not when the ETF is up 150%+ for the year? As we have mentioned before, that was our third trim in that part of the portfolio and rebalancing moves like this are part of prudent portfolio management. We are still big believers in innovation and 2020 will go down (I think) as one of the most pivotal years for ushering in a wave of innovation. Old businesses closed, new businesses opened, and many businesses had to change how they operated during the pandemic. Many of those that did adapt did well. Those that were forced to close obviously didn’t, but hopefully as we get this virus under control, some businesses that were forced to close will rise again like the Phoenix from the ashes.

There still remain many questions about behavior going forward. Will people resume their normal activities once “herd” immunity is achieved? What will happen to restaurants, hotels, and airlines? Will they be able to fill their seats and rooms fully again? What does office space look like in the future? I just read that Google will continue remote working through (at least) September of next year. Will they decide they no longer need all the office space they once had? Many businesses were concerned about remote working, but have some of them decided their workforce is just as, or more, productive working remotely than in the traditional office environment?

We believe that people will eventually resume “normal” routines in the future, but how “normal” is defined will likely change mostly due to technology and innovation. For instance, ‘telemedicine’ was somewhat available prior to the pandemic, but now it is prominently featured at most providers. ‘Teleconferencing’ has been around for a long time, but the addition of slick, user-friendly interfaces and high-speed connectivity almost everywhere have made “Zoom” meetings the standard. Will face-to-face be a thing again, or will many opt to keep their distance for fear of Covid-19 or the next virus that is around the corner? We know many of you have enjoyed the convenience of connecting with us over Zoom, while others have missed the more personal connection that comes with in-person meetings. There are benefits to both, and this time has helped all of us define what is valuable and right for each of us. Only time will tell what “normal” will look like for each us, but we do know three things:

Continuing with this theme of disruptive change, Wonder Woman 1984 opened for the Christmas holiday and I would think in a normal year that first weekend would have grossed over $100 million in box office revenues. Instead it posted a “Pandemic-best $16.7 million” (see headline below). In fact, the global cinema industry will lose $32 billion according to research firm Omdia. Now it’s true some of the biggest blockbusters have been postponed, like Top Gun 2, but some of that revenue will never be recovered. Will this usher in new box office releases direct to your fancy new home theater? AT&T (owner of HBO) is now releasing new movies to both the box office and to HBO Max simultaneously. Many other studios have said they will not be following suit, but that may change over time (economics have a way of driving behavior). Maybe there will be a rush to convert old “rec rooms” to theater rooms to enjoy the full sound and picture in high quality. 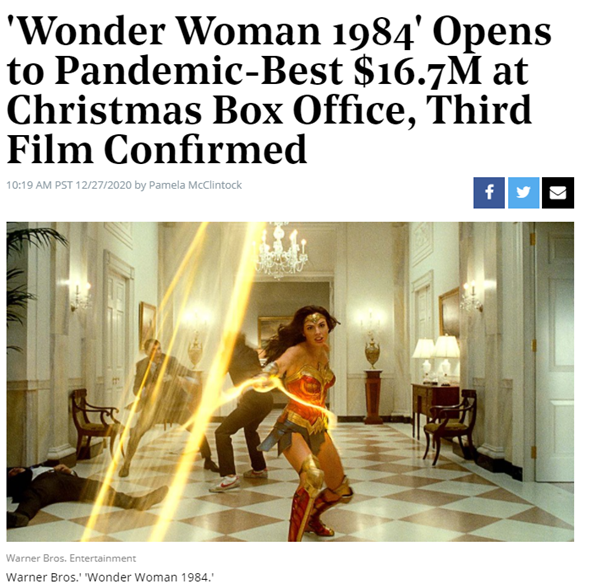 Back to the markets, we don’t pretend to be superheroes who have all of the answers. The best we can do is stick to our process and let the data (not our emotions) drive portfolio decisions. What is that data saying? As I mentioned above, the path of least resistance seems to be higher, but there are also warning signs that say to be careful. Let me show a couple from our good friend at SentimenTrader that speaks to last week’s speculation.

Below is a look at how fast margin debt has risen since early in the year. 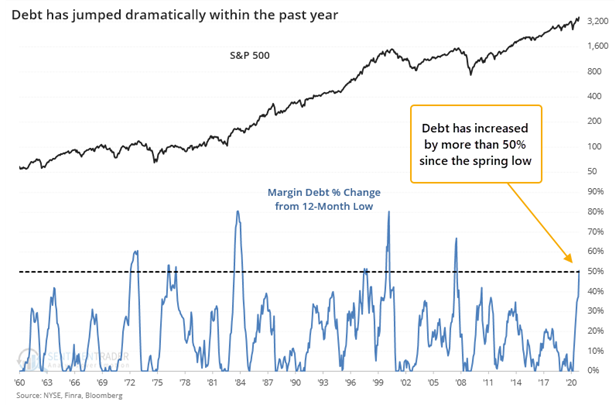 Below are the results looking forward when margin debt rises this fast. On average, not a pretty picture. You can see that many of these times were around bear markets and subsequent recoveries. You might also notice that in a couple cases they were VERY early warning signs (as in 2 or 3 years early). 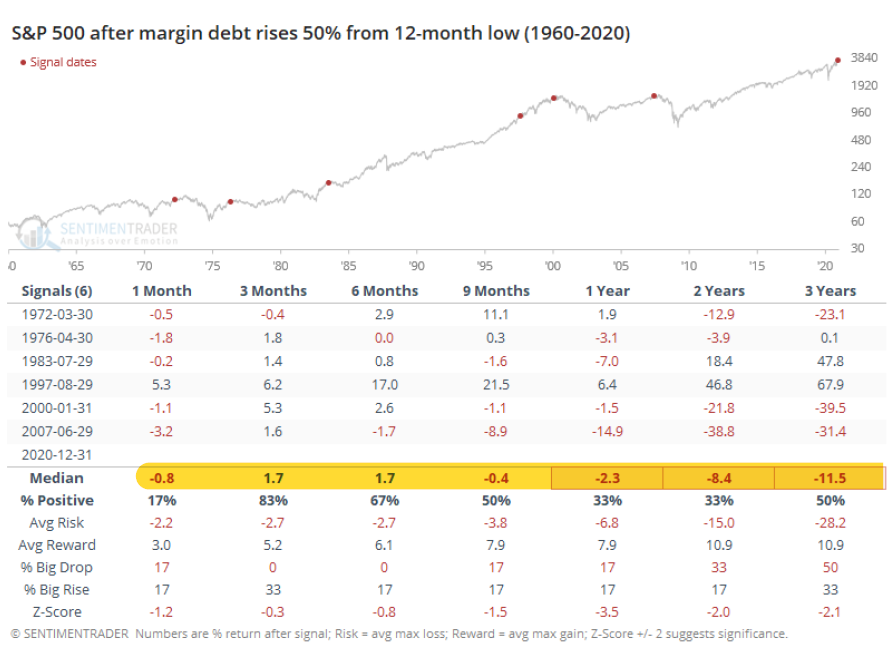 Since we are investors and not speculators, it is something to watch and pay attention to, but nothing to overreact to at the moment. If we were managing hedge fund assets, it is very likely that we would be part of the leverage in the system as well as looking for the slightest crack in the system to get out. That’s not our thing (and, I will add, many hedge fund managers are not that successful and fall by the wayside once burning through their client’s capital).

Let me finish up with a couple quotes from one of the most respected real estate billionaires in the world (no, it’s not Trump 😊).

“Everybody else seems to have a kind of timing game in their own head.  ‘Well, I can get out before so and so happens.’  The world if full of skeletons of people who believed they could get out before the bad event came.”

“Supposedly, if your index fund matched the market, you’ve succeeded.  But if that market is going down like an elevator, I am not sure that’s much success.”

Those quotes are from Sam Zell. You may not have heard of him, but he used to own Equity Office Properties and sold his company to Blackstone Group in 2006 for $36 billion. Nice timing for a guy that says you can’t time things! I guess that goes under ‘better to be lucky than good’.

Time to wrap it up on this last letter of the year.  We hope you continue to stay healthy and social distance while the vaccines are administered over the next several months and then maybe we can start to get back to something more normal. We will continue working hard all the way to the end of the year. As always, we welcome your comments and questions.