It’s that week of the year where it is culturally appropriate to blow stuff up. This leads us to want to make some crafty analogy between fireworks and the markets, but those analogies just seem cheaper than the fireworks you can buy on the 5th of July. With that, we’ll spare you the head wringing metaphors, and leave the headaches for Wednesday night when your otherwise docile neighbor decides to do his best “Bombs over Baghdad” impression late into the night.  Let’s just get to the numbers on Q2 earnings!

The chart below plots the evolution of Q2 earnings growth expectations. As you can see, the growth rate has ticked up a bit, partly reflecting results from the nine S&P 500 members that have reported results already. But even after accounting for the results that have come out, Q2 estimates revisions are nowhere near the impressive positive revisions we saw ahead of the start of the Q1 earnings season. 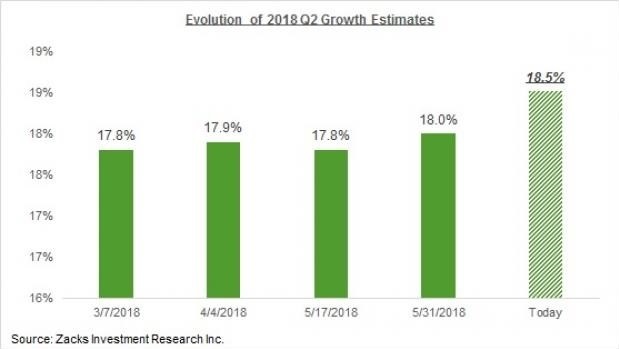 A big part of the positive revisions we saw ahead of the start of the Q1 earnings season reflected the direct impact of the tax law changes, which was obviously a one-off development. Had all positive revisions been a result of tax law changes, we would have seen only EPS estimates go up, with no changes to revenue estimates. But that wasn’t the case, as revenue estimates went up as well, which raised hopes that the aggregate revisions trend had finally turned positive after many years being in the other direction.

But as the chart above shows, we didn’t see much in positive revisions. In other words, while the overall growth picture remains very strong – there is no other way to describe 18.5% quarterly earnings growth - there is not much improvement in expectations for Q2 and beyond. The recent strength in the exchange value of the U.S. dollar and questions about global growth will likely serve as incremental negatives for investors, analysts, and portfolio managers monitoring the aggregate revisions trend.

The chart below compares current Q2 earnings growth expectations with what was actually achieved in the preceding five quarters and what is expected in the following three quarters. 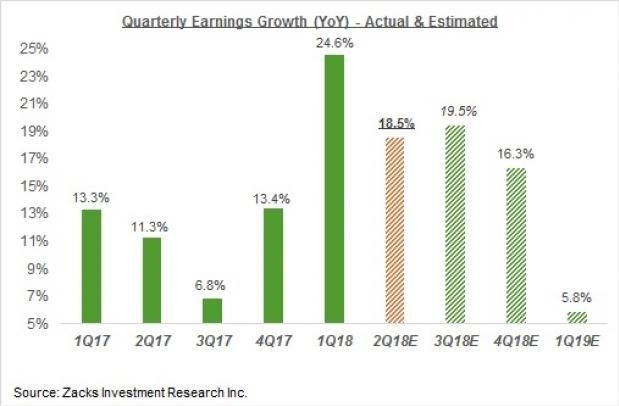 It is important to note that, while the Q2 growth pace represents a deceleration from the preceding quarter’s impressive level, the overall level of total earnings is still in record territory, as the chart below shows. 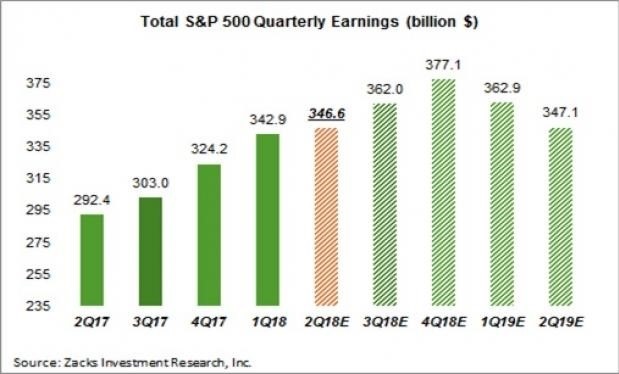 The two charts above provide different answers to the ‘peak earnings’ question. The first chart shows that the growth rate likely peaked last quarter, while total dollar earnings aren’t expected to do so until the final quarter of the year. And it remains a possibility that final growth rates for Q2 and Q3 may surpass what we saw in Q1.

Finally, note that this earnings cycle got underway back in 2009 as the U.S. economy was emerging from a significant recession. By now, we would have expected earnings growth to have returned an historically normal pace in the mid-single digits level. The reason we have these impressive growth numbers and positive revisions is attributable mainly to the effect of the tax reform, which will start wearing off towards the end of 2019.

In other words, earnings likely haven’t peaked yet. But with this cycle entering the late innings (Go M’s!), we are steadily moving towards that time.

We wish you a very Happy Independence Day! We hope you enjoy time with family and friends – and can reflect on what is good about this nation we call home (there is plenty)!