Happy New Year!  We hope this year is off to a great start for you, and that your holidays were delightful.  As for the markets, they can say yes to the former, but certainly not the latter. In fact, we just had the worst Christmas Eve in the markets EVER! Yes, ever in history. Not worst in a decade or worst this century. Worst ever. How’s that for a lump of coal in your stocking? We almost entered into a BEAR market in the S&P 500 (down 20% from the highs), and did enter a bear market in the NASDAQ and other indices. Care of our friends at Ned Davis Research, below is what investor’s Christmas list looked like and where we are today. A mixed bag of toys for sure. 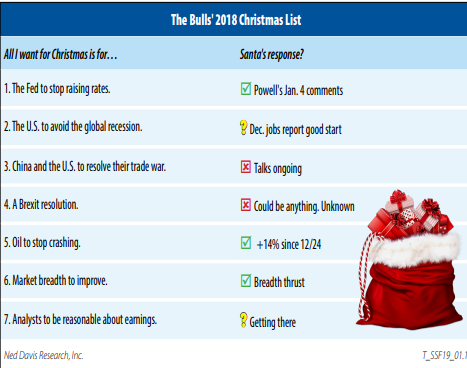 So what do we do now? With a drastically oversold market, we expected a rebound to work off that oversold position, which we are getting now. We are entering an area of the charts that may pose some problems for continued upside. We have lightened up on our equity positions as we have said in previous postings, with the expectation of a retest of the December 24th low in the market (see chart below). 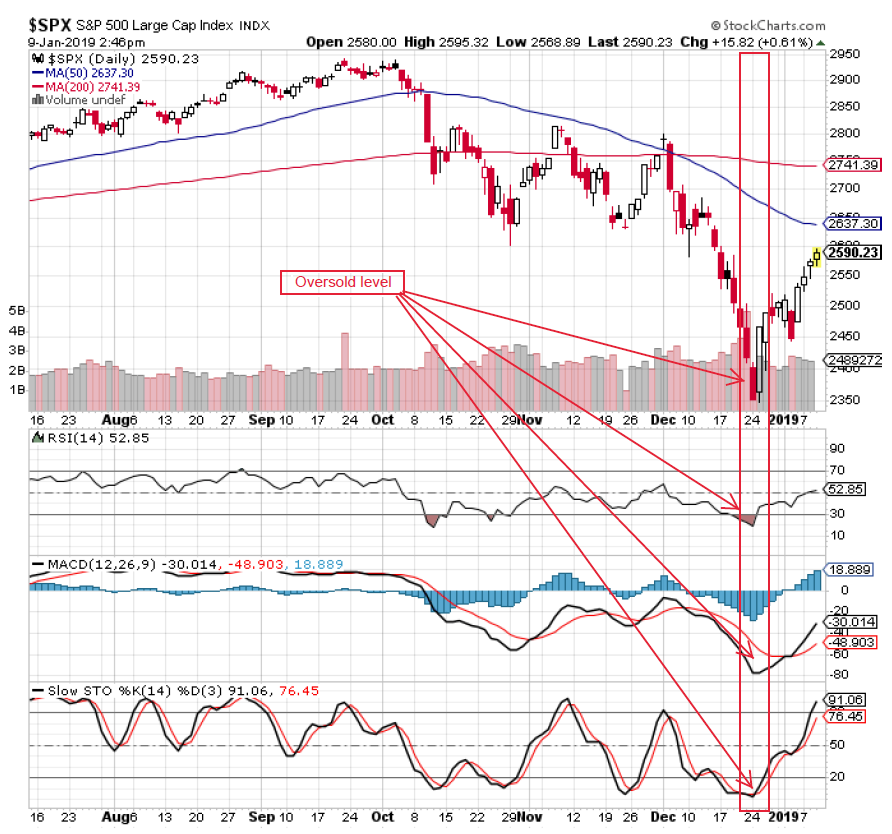 We always say the markets get their way eventually. The market wanted the Federal Reserve to slow down or halt interest rate increases, after a very hawkish commentary from Chairman Powell in October that started this whole correction. He has since backed off the rate increases and even made comments about not keeping the balance sheet roll off on “autopilot” (a word he used in mid-December, much to the chagrin of investors everywhere).

So as the party was starting to wind down, and the hangovers started to show, the FED comes back to the punchbowl to spike it one more time and keep partying like it’s 1999. We all know that at some point we can’t keep running deficits, printing money backed by nothing just to keep asset prices up.  Meanwhile, the average worker gets poorer, the wealthy get even more wealthy, and corporations continue buying back more shares (which do nothing for the economy). It’s a house of cards that seems sturdy until it isn’t. We would rather take our medicine now, instead of kicking the can down the road again and eventually have worse problems to deal with. Since that is way over my paygrade, I can only bark at the moon. Our day will come when our feckless politicians will have no other choice but to address the problems that have been ignored for decades. Unfortunately, that means cuts to social programs and being forced to make really tough choices, none of which are appealing and generally will hurt those that depend on those programs the most.

Coming down now from my soapbox, I will finish by noting that we did see a Breadth Thrust (a technical indicator used to ascertain momentum) recently in the market, which is a very good indicator of future rallies (see chart below). 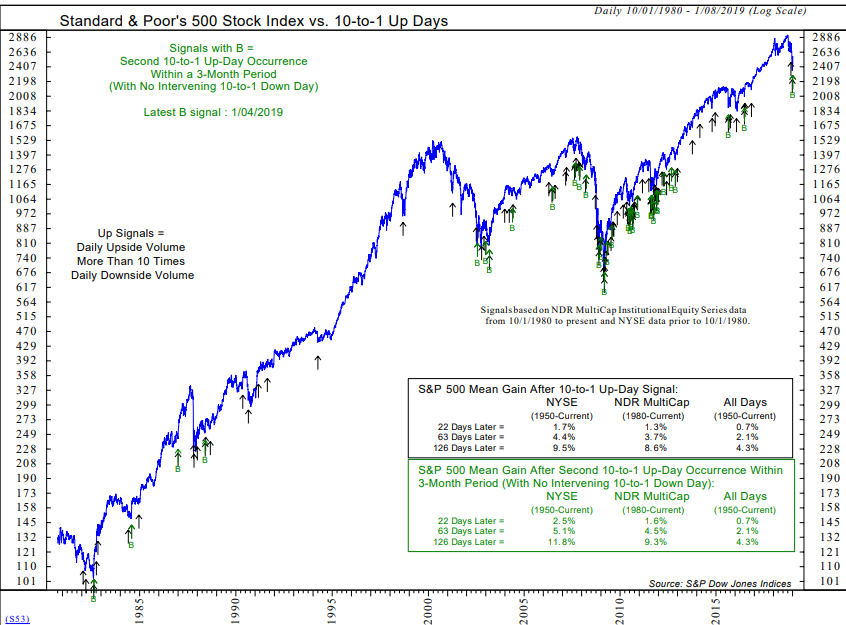 In conclusion, we of course don’t know what lies ahead this year. We will continue to dig into the research and apply our process, and help you put it all in the context of a well-considered financial plan. There will be up days, and there will be down days – though we are generally optimistic that 2019 will be favorable to investors who stay the course. If you have any questions now or along the way, please don’t hesitate to reach out at any time.