Growth Hard to Come By

Equity markets roared back in the last trading week of January, trimming loses on the S&P 500 to 5% for the year. In an unexpected move by the Bank of Japan, Governor Haruhiko Kuroda implemented negative interest rates for certain bank reserves in an effort to stimulate the world’s third largest economy. With the news, sovereign (government bond) yields around the world fell and the likelihood of any Fed rate hike in 2016 fell to 55.9%, according to the futures market. The potential for interest rates staying “lower for longer” sent the S&P 500 to its best daily gain in four months on Friday. 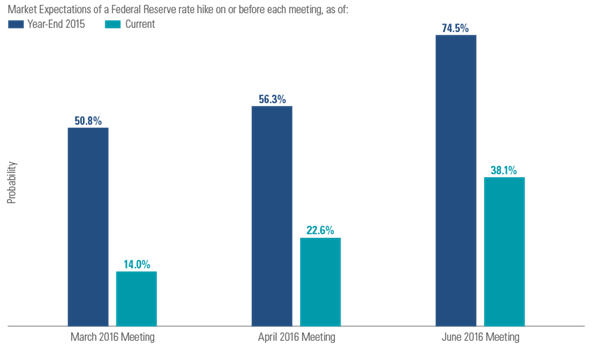 Chart Source: Bloomberg and GSAM as of January 28, 2015. Past performance does not guarantee future results, which may vary.

In economic news, U.S. economic growth slowed in the 4th quarter to 0.7% as businesses cut back on capital investment and destocked inventories. Consumer spending remained a bright spot, growing 2.2%. Treasury yields dropped over the course of the week on a volatile equity market and comments from the Federal Reserve, despite equities experiencing a rebound. Two events were catalysts for lower rates.  On Wednesday, the Fed Minutes revealed a more dovish outlook, with the central bank’s notes indicating that they will not be quick to increase rates again and that they believe that inflation is unlikely to rise rapidly.

Then two days later, Friday brought the aforementioned news that the Bank of Japan would pursue a negative interest rate policy (“NIRP” – we kid you not), which sent yields here in the U.S. to a nine-month low.  The probability of an interest rate hike at the March Fed meeting ended the week at 14%, down from 26% just one week ago.

This morning, the January manufacturing ISM survey came in virtually unchanged from December at 48.2%, the fifth straight month below 50% and the longest period of contraction since the last recession in 2009.  The manufacturing sector has been hit hard by a combination of weakness abroad, the strong U.S. dollar, and the downturn in the energy sector.  The Fed is mindful of concerns that further rate hikes at home while other global central banks are easing will put further pressure on the dollar, an in turn pressure the factory sector.

We are currently in the heart of the Q4 earnings season, with more than 120 S&P 500 companies reporting results this week. Google’s (GOOGL) parent Alphabet will be reporting after the close today, but we have had earnings from Aetna (AET), Cardinal Health (CAH) and others this morning.  According to Zacks Research, including all of this morning’s reports, we now have Q4 results from 207 S&P 500 members that combined account for 53.5% of the index’s total market capitalization. Total earnings for these companies are down -3.1% from the same period last year on -3.1% lower revenues, with 72% beating EPS estimates and 47.6% coming ahead of revenue estimates.

Crunching the numbers with estimates from the remaining companies yet to report, earnings are expected to decline by 6.5% from the same period last year on 5% lower revenues, the third quarter in a row of negative earnings growth.  As we have been reporting in this space recently, growth is becoming harder to come by, at least for the foreseeable future.