Grateful for Their Sacrifice

We would first like to wish everyone a happy Memorial Day as we remember those who gave the ultimate sacrifice so that we could have the freedoms that we enjoy today. Freedoms don’t come easy, nor do we always agree with the ways some of those around us express those freedoms. In a time where we are so divided as a country, it is important to remember the cost that was paid in the past. While this weekend is often looked at as the “Unofficial Start to Summer,” we hope you will take some time look past the BBQ and day off of work, and do something to honor those who paid the ultimate price. 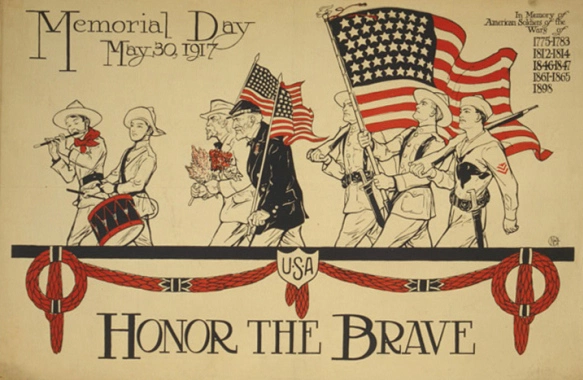 While time passes and things change, they also seem to often be on repeat. Today’s issues look eerily similar to issues of the past. Issues in the Middle East with Iran, North Korea testing missiles again, Russia flying sorties close to US airspace in Alaska, China becoming a naval influence in the South China Sea. Nobody ever said freedom was free nor guaranteed.

We ran across a recent article opined by Thomas L. Friedman in the New York Times. Here is a link to it. The summary of the column is that it’s not reasonable to expect China to readily acquiesce to our demands of access to their markets, reduce or eliminate trade tariffs, and to stop forced technology transfers, because for the last 40 years China and their economy have become used to these advantages. Those things were fine when China’s economy was small and growing, but now that they are the second largest economy, those are intolerable and unsustainable. The bigger question will be whether you try to solve all the problems today or take what you can get and go back to the bargaining table many times in the future to claw back those trade imbalances? Just to be clear, that is way above my pay grade!!

With China being the headline that is attributed to recent market volatility, it is useful to look beyond that sometimes simplistic explanation. What else is happening that presents opportunity or concern? Let’s look at a couple things today. Below is a chart of both Leading Economic Indicators (LEI) and Coincident Economic Indicators (CEI). Typically, we would look at the LEI to get a look at indicators that lead the economy up or down. You can see the LEI (in Blue) turned up before the recession in 2009 was over. You can also see that the LEI started to turn down before the financial crisis in 2008. Where are we today?  You can see in the lower chart that the 6-month LEI is only slightly above where it was 6 months ago, so still positive. The rate of change has slowed and that is usually the first thing that happens before a downturn in the economy. So, our leading indicators at this point still look ok, but they are getting to the point where we may see them dip. 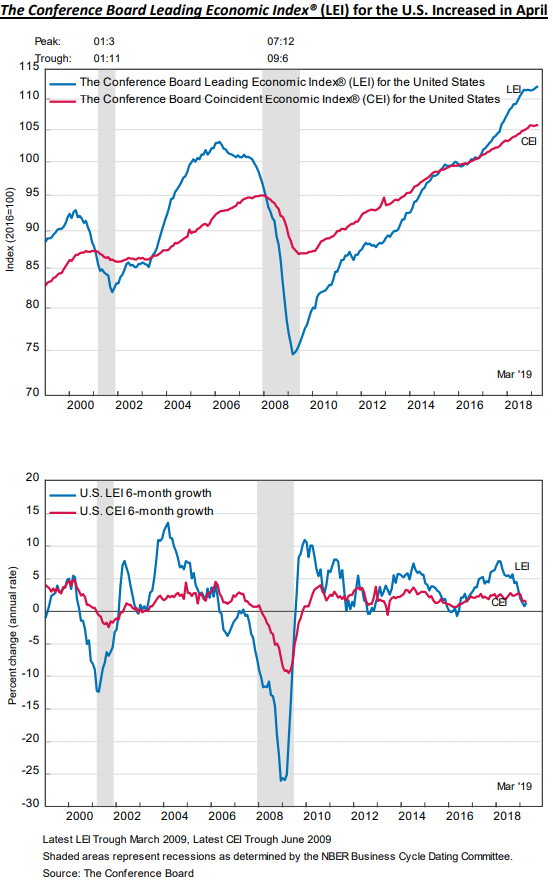 To go along with the slowing rate of change of the LEI, we see that the ‘flash PMI’ has moved lower in the month of May. Readings above 50 represent expansion, readings below 50 represent contraction.  The flash reading for PMI (Purchasers’ Manager Index) was 50.6 for Manufacturers (down from 52.6) and 50.9 for Service businesses (down from 53).  So, much like the LEI above, the PMI numbers are looking soft. You can attribute some of that to the ongoing trade issues, but I also think you have to question whether the business cycle is getting close to its end. That will be revealed in the fullness of time. 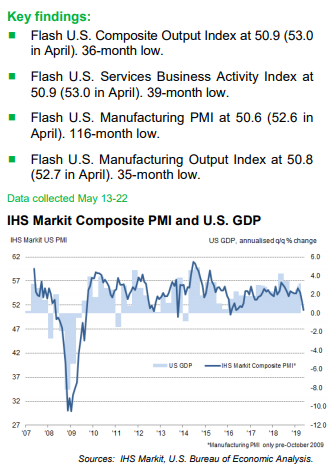 Overall, we are cautiously optimistic, but more and more indicators are starting to turn yellow.  We will continue to stay vigilant and if we need to we will take protective measures.