Are we finally there, or is it a mirage? As you likely know, the West Coast has been amongst the last to remove restrictions and return to “normal.” However, we’re almost there, as California actually “reopened” on June 15th and WA and OR are on track to do so later this week. Have we finally “beat” the virus? That’s a hard concept to define, but I think many of us would agree that a removal of restrictions certainly is one way to answer yes.

Continued uptake of the vaccination will likely be key to staying ahead. As of last check, the U.S. is ~50% fully vaccinated. 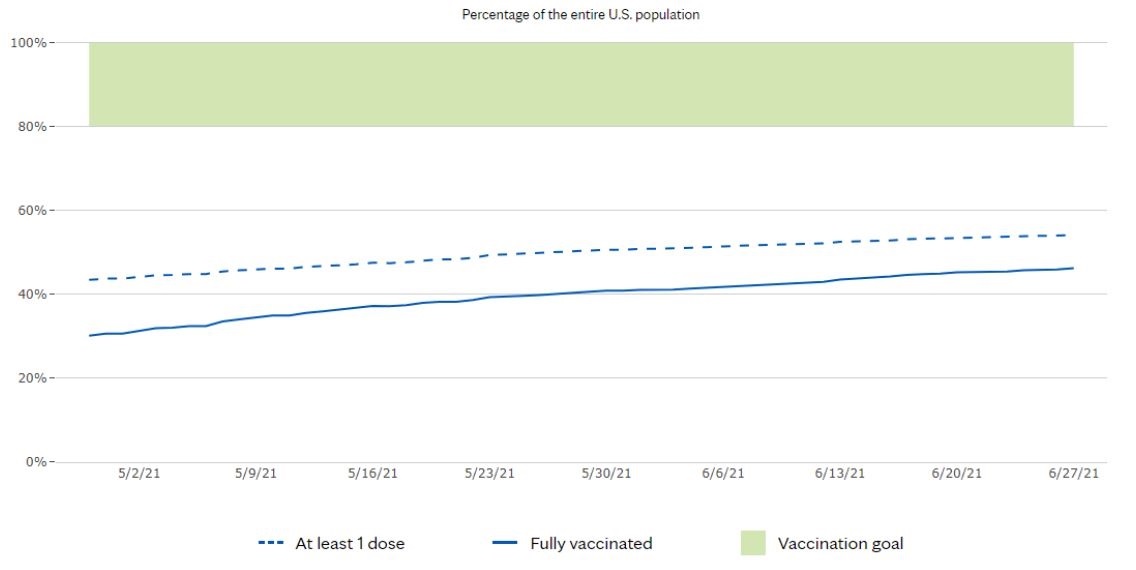 For those of us in the Puget Sound region, that number may seem surprisingly low, as we are amongst the best in terms of vaccination rates. Here is the map of the U.S., with both the West Coast and East Coast above average in this regard. 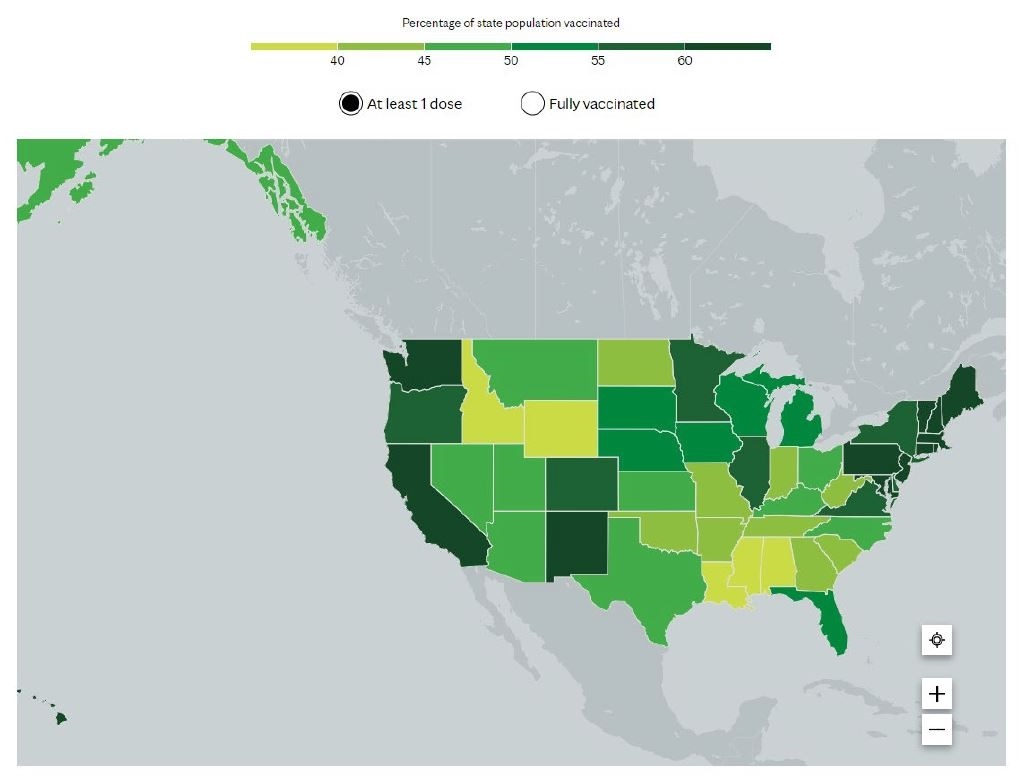 It is not hard to see why the economy is getting better and why so many people are going back to work. So can we finally move on from mentioning (or even focusing on) COVID every time we talk about the economy and the markets? If you’re like me, you’re hoping the answer is yes, but then headlines like this one pop up:

Further to the north, here’s an excerpt from the Willamette Week from yesterday.

I would like to think it would be hard to “go back” to another full lockdown, but that’s exactly what is happening in other parts of the world right now. If I were in the theater business basking in the glory of a fantastic weekend thanks to F9 (Fast & Furious 9), should I be worried that this Delta variant is going to send my business backward once again?

It’s hard to know, and we certainly aren’t scientists who can predict what this mutation or any future mutations might do to our daily living. For now, the economy and the markets seem to be ignoring these latest developments. We can see that in the chart below, which highlights the leading indicators of the economy. You might ask, are they ignoring them at their own peril? You could possibly say so, but the evidence over the past few months would indicate that they have plenty of good reason to not spend too much time worrying. If the vaccines continue to do their job, we will lean towards remaining optimistic – but we always want to be mindful of not becoming too complacent. Significant headlines landing on a complacent market don’t usually end well. 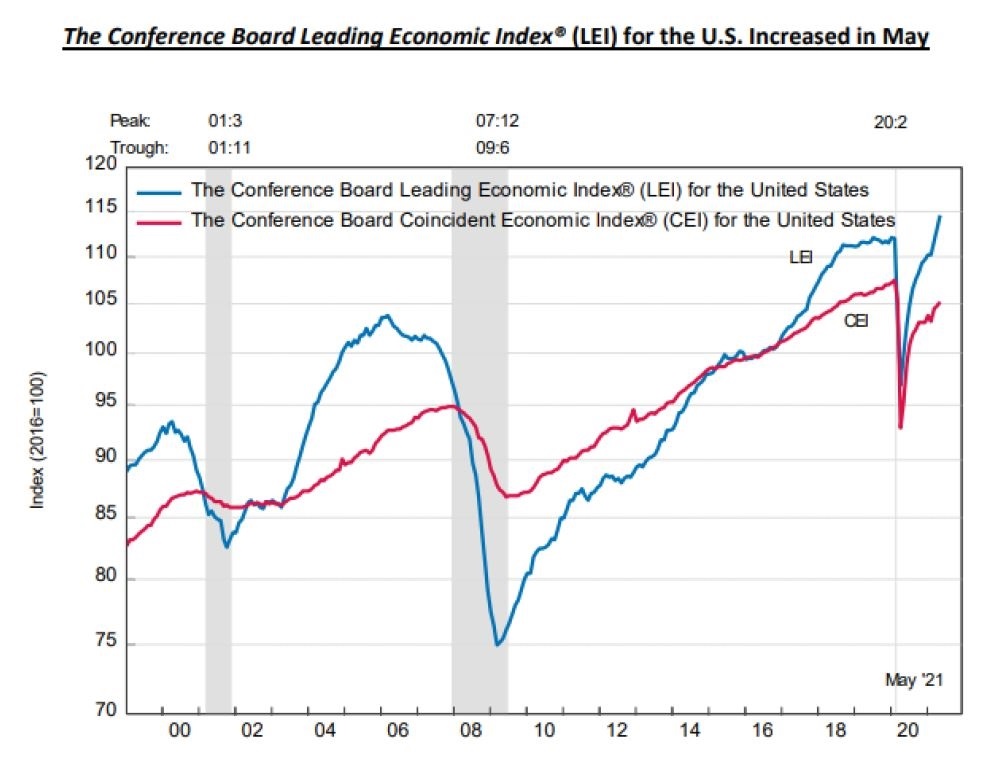 As we wrap this up, let’s remember that the incredible recovery in the markets and the economy were driven not only by hope and optimism in the science, but also largely by the FED’s extraordinary response. If they played a major role in moving things forward, we would be foolish to ignore them as they wind things down. They have a tricky and somewhat unprecedented task on their hands, and history clearly tells us that threading the needle towards a more normalized posture without overturning the apple cart is hard. Tighter monetary policy must come at some point, and this is where things get tricky. Given the importance of this, let’s take a look at a few indicators to see where things currently stand. First, here is the FED’s balance sheet. You can see it continues to grow and Chair Powell said it will continue that way.

Next is the 10-year Treasury rate minus the 2-year rate. Higher is better in this case. It says the yield curve is sloping up. That’s also good.

If we are to believe the FED Chair, until this next chart (unemployment) gets back to levels we saw before the Pandemic, they won’t be changing their policies. No really – there’s no way that this FED wants to wait 10 years to get unemployment back down to those levels, like they did after the Great Financial Crisis. They’ve got the car driving in the direction they want, and they aren’t likely to detour before they reach their destination and thereby risk getting lost!

Let’s put this together. The evidence is still favorable regarding the virus and the economy and data looking at the FED says they are still a ways off from taking the types of actions that might overturn the apple cart. Not a bad combo for investors and businesses alike. Of course, I would be remiss not to say that this data shows we just keep throwing money at the problem, kicking the can down the road and pretending that $28 trillion in debt doesn’t matter (if it does, it’s somebody else’s problem). Certainly for a different FED Chair to handle, and we’ll leave it to you to decide the wisdom of this. That said, there are reasons to be both optimistic and vigilant as investors. There’s also reason to believe this will be amongst the last installments where COVID is the dominant theme, and for that we rejoice! It’s been a long road. Longer than we ever expected in early 2020, and we thank you for staying the on road with us throughout.

Have a great week and try to stay cool.  It looked like the sky was burning last night.