From Zero to Hero and Back

After a week away from writing, let’s just take a quick look at two topics that have been on my mind of late (aside from a desire for more sun).

To get us started, let me introduce you to Cathie Wood, the CEO and CIO of ARK Invest. For those of you who don’t know her, she started ARK back in 2014, after a successful career at AllianceBernstein. We were introduced to her and her strategy in mid-2017. Jeff and I made a trip to Texas to do more diligence on the team and the strategy. We came away from that very impressed with the thoroughness of their research. We made our first purchase in early 2018 and it continues to be a long-term holding in the portfolio and a major driver of returns over that time. Recognizing that it can be volatile from time to time, we sold small portions several times over the last year or so as the position size got to be too large, pulling virtually all of our initial investment out of the position while maintaining a suitable position size moving forward.

Fast forward to today. Cathie has numerous YouTube channels following her and the strategy, as well as being the subject of almost constant CNBC coverage over the last several months. Every trade she makes is subject to numerous tweets, Instagram posts, and more. She certainly isn’t flying under the radar like she was when we first made an investment in her funds. In fact, there was so much coverage of her, we discussed selling more just because of the spotlight on her. Today, the media has died down to a certain degree and the spotlight has begun to shine elsewhere.

The only reason I bring this up is the market tends to be manic/depressive. Meanwhile, not much has changed with ARK Invest and they continue to publish research and follow their investment themes, see here.

Cathie has gone from less than $100 million in assets when we first met her to over $50 billion in assets, though she appears to be heading back down a bit from that high water mark. As I always say, you can’t sprint a marathon, nor can Cathie and her team sustain 150% returns in her portfolio year in and year out. A pullback and a pause to catch their breath is to be expected before the next move begins. When she goes from hero back to “just another investment firm,” that’s when we will be able to add to our allocation and get ready for that next leg higher. Until then we need to let the spotlight shine somewhere else. Take a look at the chart below showing the flagship ETF – ARKK (the one we own in client portfolios). The ETF appears to be oversold and setting up for a nice double bottom. We will see how it plays out over the next couple weeks/months on this. 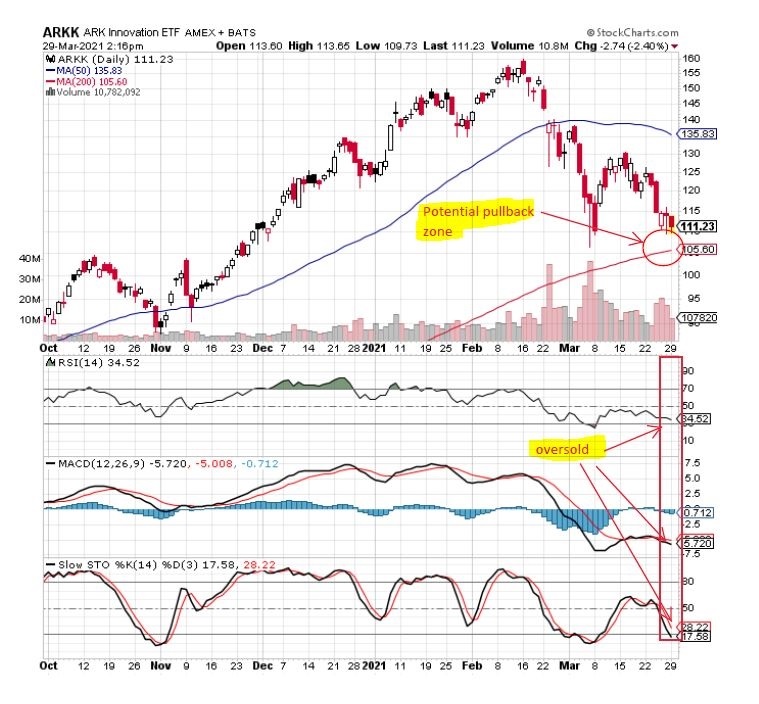 The second topic I would like to discuss, and I’ve made reference to this many times in the past, is the idea that the majority of wealth in this country can’t continue to be concentrated in the top 10%. I think just about everyone reading this is not part of the top 1% in wealth, but many may be in the top 10%. Take a look at the next chart to see the concentration in the top 10%, compared to the bottom 50%. I’m not going to pretend that I know the answers to fix the disparity, but from a social standpoint, it is clear that this can’t persist forever. 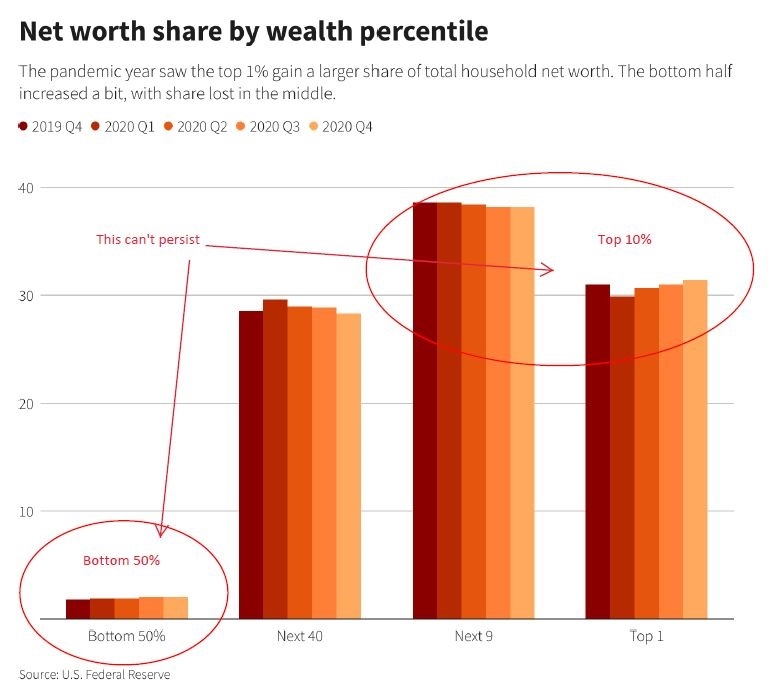 I believe there are many potential solutions. Education and training for the world going forward, which should include more STEM education. Not only college, but vocational education has to be part of the solution, as well as business training in-house for the skills they are looking for. In addition, we read over the weekend that over 1,100 jobs (representing ~25% of the US workforce) require some form of licensing. The time and cost associated with licensing is barrier to entry for many, thus hurting the ability for workers to pursue new careers, many of which would otherwise provide meaningful opportunities for personal and professional growth.

I had a conversation with a friend last week and this was part of the conversation. Small business has always been the lifeblood of the economy and in a post-COVID world, where many businesses have had to close, that will likely keep unemployment higher than it should, unless there is sustained new business formation going forward.  The chart below shows maybe some hopeful signs as we come out of the lockdown.

Bring on Spring and some warmer temps here in the Northwest.