As expected, in a market environment dominated by Fed speculation, the major news item of the week was contained in the minutes of the April Federal Open Market Committee (“FOMC”) meeting. Specifically, members made it clear that the US Federal Reserve would like to raise rates at either its June or July meeting, if conditions allow. Most FOMC members said a June rate hike would be appropriate if the economy continues to improve. According to the minutes, risks to that outlook include a UK referendum on whether to leave the European Union on June 23rd and possible instability associated with China’s currency.

Economic support for the Fed came in the form of an uptick in key second quarter indicators. While the April US employment report was slightly weaker than forecast two weeks ago, several recent data points show an uptick in both economic activity and inflation. US industrial production rose a robust 0.7% in April, led by utilities output, while the Consumer Price Index rose 0.4%, the strongest monthly reading in more than three years. The CPI increase was led by a 3.4% increase in energy prices. Housing starts rose at a stronger-than-expected rate of 6.6% in April, while building permits rose 3.6% from the previous month. The recent data dovetails with more hawkish rhetoric from the Fed.

With potential rate hikes coming into view, treasuries fell for the week and recorded their largest weekly loss of the year. Prior to the release of the Fed minutes, the market had not considered a June rate increase probable, and there was a pronounced move in the probability of a potential June interest rate increase. As indicated by futures trades (and shown in the chart below), the market was pricing in a 5% chance of a Federal Fund Rate increase at the start the week, but a nearly 30% chance at the end of the week. Meanwhile, the yield on the 10-year US Treasury note increased to 1.86% from 1.75%. 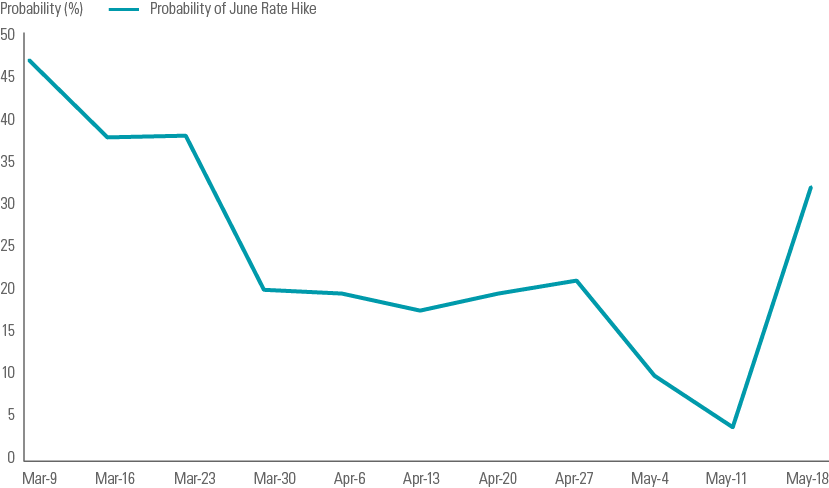 Chart Source: Bloomberg, GSAM as of 5/18/16. Past performance does not guarantee future results, which may vary.

Outside the US, economic headlines were less impressive. While Japan reported a robust 1.7% annualized rate of growth in gross domestic product in the first quarter of the year, all was not as appeared. Japan is one of the few nations that does not seasonally adjust its GDP data for leap years. The extra day gained is believed to have accounted for about 1% of the 1.7% growth rate. Capital expenditures continue to contract in Japan, despite record-low interest rates resulting from the Bank of Japan’s negative interest rate policy.

Greece was back in the news last week. The International Monetary Fund proposed a debt relief package for the beleaguered nation in advance of a May 24th European summit to tackle its finances. The IMF proposal includes provisions that payments of principal and interest would be skipped until 2040 and some loans would extend their maturities out to 2080. Germany is said to see the IMF proposal as an opening bid in a negotiation that EU leaders would like to conclude next week. The hope is for a quick agreement on a debt deal to avoid a messy Euro squabble in the run up to the “Brexit” referendum in June.

China data was underwhelming, reporting somewhat weaker than expected economic data. Industrial production, retail sales and fixed asset investment were all below economists’ forecasts. China’s highly indebted economy continues to struggle amid slowing growth as it transitions from an investment-driven to a consumer-led economy.

Adding insult to injury, the Philippines dislodged China as Asia’s fastest-growing economy. Economic growth in the Philippines expanded at 6.9% in Q1, the fastest pace in that country since the 1970s. China’s growth slipped to a 6.7% annual rate in the same quarter. Economists cited strong growing domestic demand in the Philippines, spurred by infrastructure spending and consumption.

Demonstrating the limits of central bank intervention in free market economies, the European Central Bank’s bond buying program is beginning to run up against purchase caps in government bonds issued by some of its member countries. The ECB has a self-imposed limit of one-third of a country’s outstanding debt. With nearly a year to go in the program, the central bank has almost reached its limits because of purchases of Irish and Portuguese government bonds during the debt crisis earlier this decade.

Finally, and tragically, the Egyptian navy recovered the first debris in the wake of the downed EgyptAir flight 804. The Cairo-bound flight from Paris crashed into the Mediterranean Sea just inside Egyptian airspace. While a forensic examination of the wreckage has not yet begun, the working assumption of Egyptian authorities is that the flight was brought down by an act of terrorism.

BOILING IT DOWN...
Regular readers understand that the US Federal Reserve is somewhat boxed in by weaker international economies as it considers the timing of rate hikes, as chair Janet Yellen has previously acknowledged. Rising rates at home contribute to a stronger US dollar, negatively impacting the exporting activities of major US multinationals, which in turn hurts domestic job creation and economic growth. Not to mention the effect on the price of crude and energy company earnings, the fear of which so gripped the market over the winter months. With the potential for a Fed rate hike coming in the next few months, equity market volatility is likely to increase.