This past Wednesday, the Federal Reserve concluded their second meeting of the year and raised rates for the first time since 2018. They raised rates by 1/4 point (or 25 basis points) and indicated that they could raise rates every meeting for the rest of the year, bringing a total increase to 1.75% for this year. Expectations for 2023 are for a 2.5-2.75% FED funds rate. Take a look at the FED “dot plot” below to show you what their expectations are. 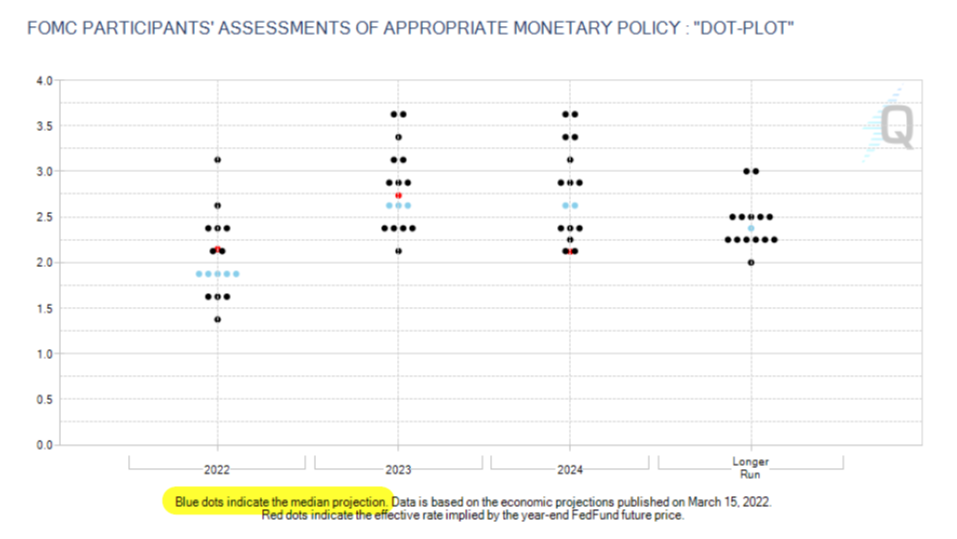 As you know, I have been hard on the FED over the years, but I’m going to try and present the glass half full story today (if possible), though we’ll need to look briefly at the half empty argument to better understand the half full perspective.

Below is a chart of the FED funds history going back to the 1950s. You can see that every increase has led to a recession shortly after rates peak. Why, you ask? Because rate increases take 6-12 months to work through the system. By the time you realize the economy has slowed down, you still have several rate increases to digest. For context, it’s hard to see the bump, but the latest increase is the little uptick in the lower right corner of the chart. 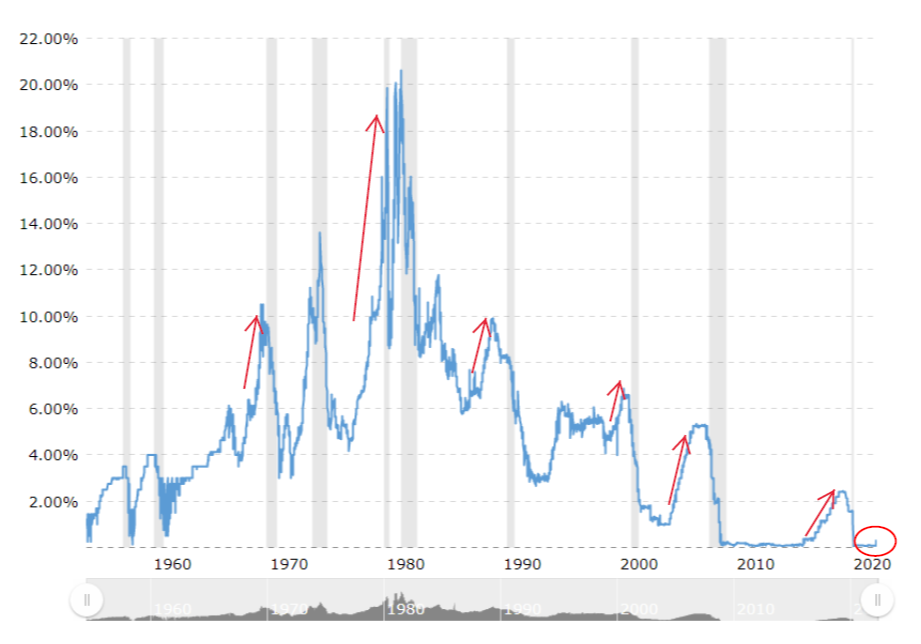 Understandable if you are straining to see that uptick, which helps illustrate the severity of the environment we’ve been living in. The chart above makes it very clear that we have been in an extraordinarily low interest rate environment since basically the Tech bubble over 20 years ago. Keep in mind that low rates aren’t the only FED tool for supporting the economy, and the full toolset has certainly been on display since March 2020. Let’s look at how this low-rate environment has affected the stock market over the last two decades. 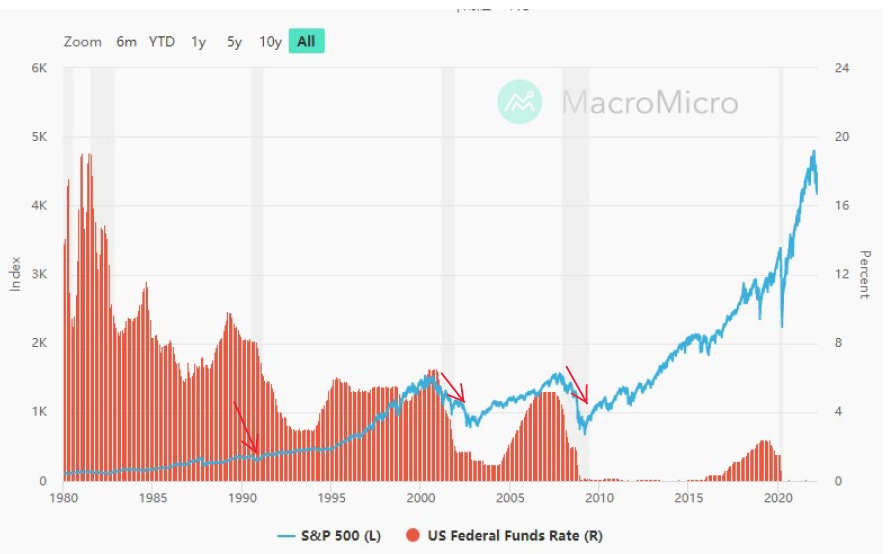 You can see that those grey shaded areas correspond with a decrease in the S&P 500 and are also defined as a contraction in business activity (aka, a recession).

So, the period between the end of the ‘great recession’ and the beginning of COVID was marked by a stock market that significantly increased in value. The market took a breather for a couple months during COVID, before continuing to climb even higher, thanks in large part to zero percent interest rates.  Having interest rates at very low levels helps much of the economy, as consumers and businesses are able to borrow at much lower levels than would be typical. As this leverage makes its way through the system, the economy grows, profits grow, and stock prices grow. After all, over the long-term, stock prices are a reflection of expectations of corporate earnings.

Do low interest rates explain all of the growth in stock prices? Of course not. The next chart looks at the price you pay for every dollar in earnings for the S&P 500. You can see the market “multiple” was around 15x in 2009 and has increased to 35x in the current year. If we were to show a longer-term chart, the average multiple was around 17x (dashed line). So right now, we are about double the long-term average multiple on the market. For a variety of reasons (some good, some concerning), investors are currently willing to pay more for a dollar of earnings than they have in the past, and by a wide margin. Will the “norm” drift higher, or will multiples return to historical averages? No one knows, but we do know a return to long-term averages would be challenging for investors. 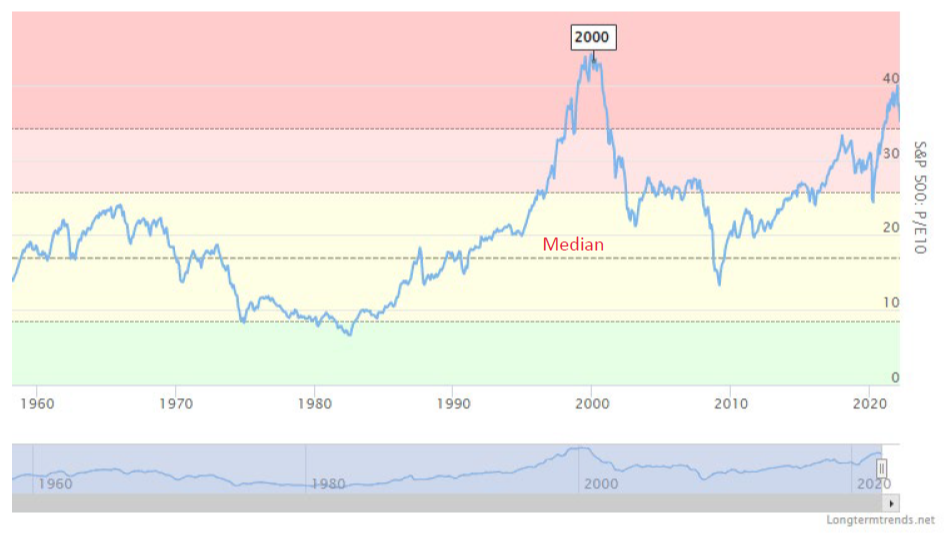 Wait Chris, I thought you were presenting the glass half full today? You may be thinking, “If I understand correctly, interest rates are at historically low levels and moving up. Every time they moved up, the economy went into a recession and prices went down. Add to that the valuations are close to record highs and if they went down to historical averages, we could see a halving of the market? I’m not sure where the glass is half full!”

Ok, fair enough. Before we look further at the half full argument, let me add one more piece to the glass half empty side. Inflation is at decade high levels and the FED is forced to raise rates into what we think is already a slowing economy. Chance for a policy mistake? Here is a quote from the FED Chair (Monday, March 21).

Ok, fine. I will get to the glass being half full now. The markets are down but have generally been hanging in with all the issues mentioned above, with a war in Ukraine to boot. It’s no fun to see account values down, but our models still show US stocks as the second-best asset class to own, behind Commodities.

History says that markets actually go up at the beginning of rate increases. Our short-term indicators have been flipping between risk-on and risk-off (see chart below). Right now, they are back to risk-on based on last week’s market movements. 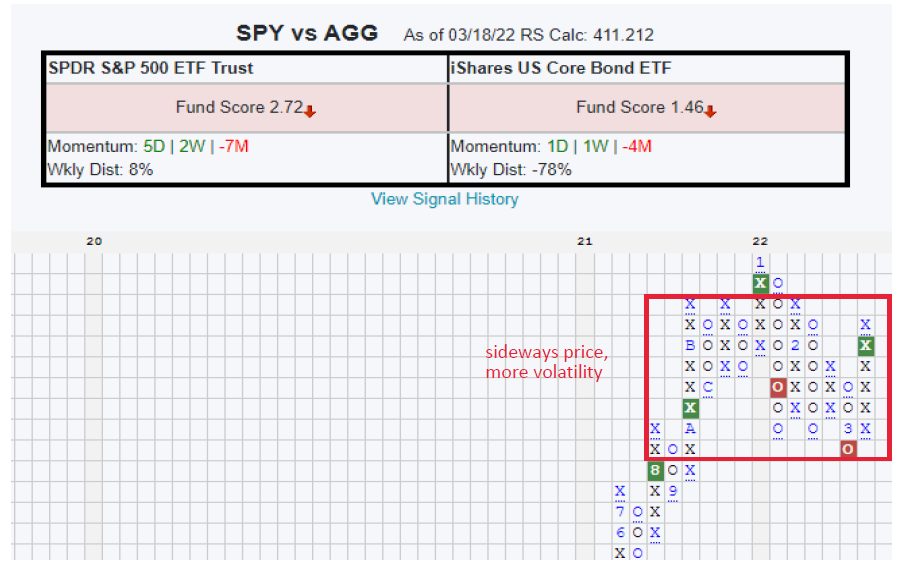 Our long-term chart will not flip for a while. We will be looking for more information from this short-term indicator. Remember, we are always looking for the best asset class to invest your money, while always maintaining a wise level of diversification. That indicator (the model) will lag the market. We don’t have a crystal ball, nor do we want to tell the market what to do. We will go by the evidence and the trend and position accordingly. Right now, the trend is still holding on, but it’s close and so is our model. As you know, we’ve already shifted to more commodity exposure, but recognize that US stocks are still our second favorite asset class at this time.

If the FED follows through on what they are saying (that’s a VERY BIG IF), the markets will correct to levels that will be very uncomfortable for those that are “buy and hold” investors. It’s just too early to know if that will happen yet. For now, we are paying very close attention to all of our indicators for signs of market breakdown. Same can be said for the housing market, auto market, bond market and anything else that has been propped up by super low interest rates.

Ok, so the glass is half full, but the water may not be its most potable. The long-term for investors is always favorable (just look at the third chart above), but the short-term can be unnerving, with right now being no exception. Our job is to help you wade through the challenges of the short-term so that you can stay invested and reap the rewards that come to patient capital in the long-term.