Excuse me, where’s the recession?

One of the big questions that pundits are asking is, are we in a recession?  In fact, most CEOs expect that we will enter into a recession in the coming months.

In fact, you may be asking if we are already in a recession, because the last two quarters have shown negative GDP. 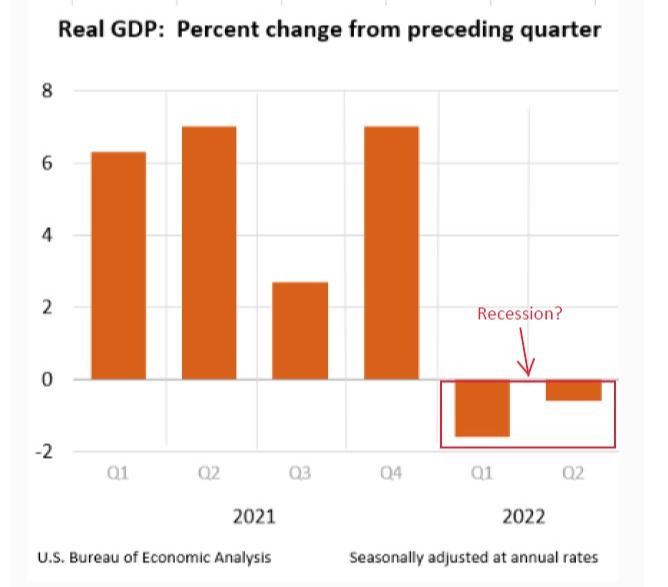 While the typical definition of a recession is two consecutive quarters of negative GDP, the true answer is a recession is defined by the NBER (National Bureau of Economic Research). They define a recession as “a significant decline in economic activity that is spread across the economy and that lasts more than a few months.”

Much of the volatility in GDP can be traced back to pandemic-related shutdowns and corresponding reopenings. It’s no secret there have been supply chain issues related to COVID that we are still working through.

If you want my opinion, I think that while we have had two consecutive quarters of negative GDP, I don’t think we are quite in a recession at this point. I don’t think we have had “a significant decline in economic activity that lasts more than a few months,” at least not for the first half of the year. Where are we at for the 3rd quarter GDP estimate? For that we turn to the Atlanta FED and their GDPNow estimate. 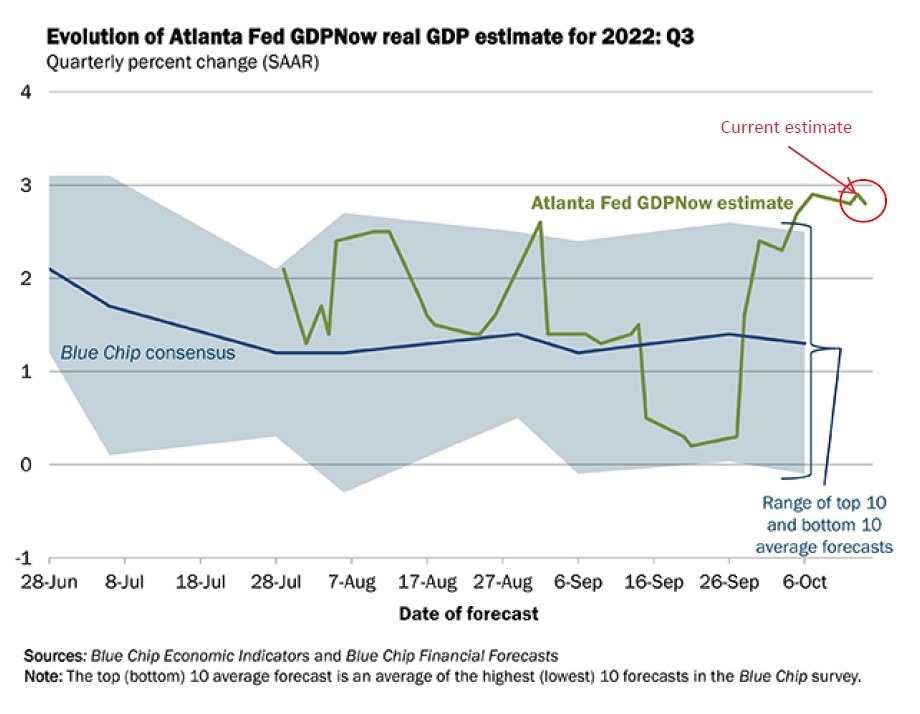 You can see that they are now forecasting almost a 3% growth in GDP for the 3rd quarter.  In fact, here is a quote from Brian Wesbury of First Trust:

But if you listen to the news and read headlines, all you hear about is the ‘R’ word.

In fact, here’s what Google search results look like as of the end of September.

Everybody’s afraid of a recession, but we don’t know the actual definition, nor do we know exactly when it will be here and to what magnitude. That’s not to say we shouldn’t pay attention to the possibility of one. We do have some good indicators that can show us if we are headed in that direction.

You can see that it has a pretty good track record.  When the 10/2yr curve goes negative, usually you will have a recession in 6-9 months. Let’s look at the 10/3mo curve.

You can see that this has a very good record as well. Except that this yield curve is not inverted, YET. I would expect it to invert in the next month or so. That will usually give us 3-6 months of warning.

We can also look at the leading economic indicators that we have talked about before. 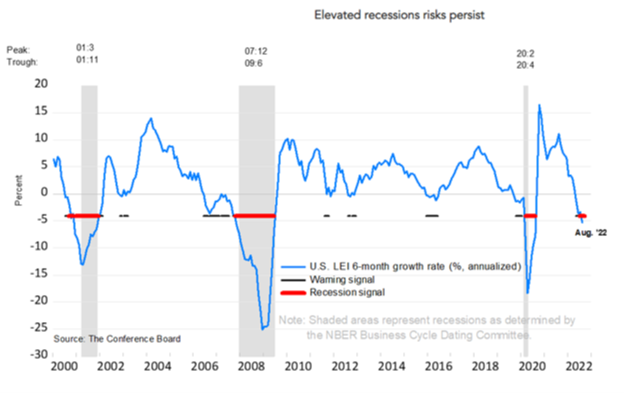 You can see that the LEIs have come down to a point that signals a recession. You may notice that there is a much shorter lag between this signal and the onset of a recession. So, I think it’s safe to say that we have not been in a recession in 2022, but that we should likely be in one in the not-too-distant future.

Let’s take a look at one last indicator. This is good to note the beginnings of a recession, but also to note when the recession ends. Keep in mind, that we won’t have this information until after the fact. We actually think this is one of the mistakes the Federal Reserve is making when determining what interest rates should be. They are using backward-looking data to project forward. If you notice, unemployment bottoms and starts to head up at the beginning of a recession. If you look at where we are today, we are at the bottom for unemployment, but we haven’t seen an uptick yet.

So how will we know when the economy turns then if we only know in hindsight? The best indicator for that looking forward is the stock market, which is one of the components of the LEIs. The market will likely start to move higher before the data tells us things are getting better.

One example is the GFC (Great Financial Crisis). The recession ended in June of 2009, but the markets bottomed in March of 2009. Another example is the recession that ended November 1982. The markets had already started to move higher months before the official recession was deemed to be over. It’s not a perfect science, but it’s pretty good.

The depth and length of this recession will determine the depth of the market drawdown. Add to that whether the FED makes a mistake by raising rates too far and if that causes something else to break. We don’t know the answers to those questions, but we do know that our model has 50%-70% of your money out of traditional stocks at this point, depending on your risk tolerance.