In the world of economics, you’re only as good as your last prediction (or press conference) (and it is a field of prognosticators). If you remember, FED Chair Jerome Powell in his last press conference wanted to remake his image by getting rid of the word ‘transitory,’ a word he and his colleagues used for the better part of 2021. It’s kind of like removing that bad picture from your online dating profile (not that I would know about that, mainly because I don’t have any good pictures 😊)

Our good friend Scott Minerd, Global CIO of Guggenheim Investments, to his credit, has been saying that the economy is more likely to suffer from deflation than prolonged inflation, and once things start to normalize (toward the end of 2021) we will start to see the fear of inflation subside. See his tweet below. 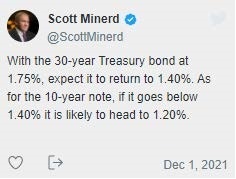 We mentioned this in a roundabout way a couple weeks ago. He is only looking at one side of the rate curve in this tweet, whereas we were looking at both the 10-year and the 2-year. The 2-year being the part the FED has more control over. I’ll reference that again to remind everyone.

You can see that the spread between those two rates has been narrowing since April. That is typically a sign that growth is starting to slow. In this case it could mean that things are normalizing, or it could be an early warning that a recession is on the horizon (I think we’re way too premature for that). But if it settles out here, that would say the economy is in good shape to grow (albeit more modestly) over the next quarters to years. On the other hand, if the FED looks at inflation as finally “out of control” and raises short-term rates, they could potentially contribute to the very thing they are supposed to help avoid (remember driving from one ditch to the other).

So, with inflation now running at the fastest pace since 1982, now is the time for us to be concerned, right?

Wait, wasn’t that what the FED was trying to do the last 13 years when inflation was sub 2%?  Oh, and we finally got our wage inflation that we all wanted so dearly. A nice spike to 4.3% for November, year over year. 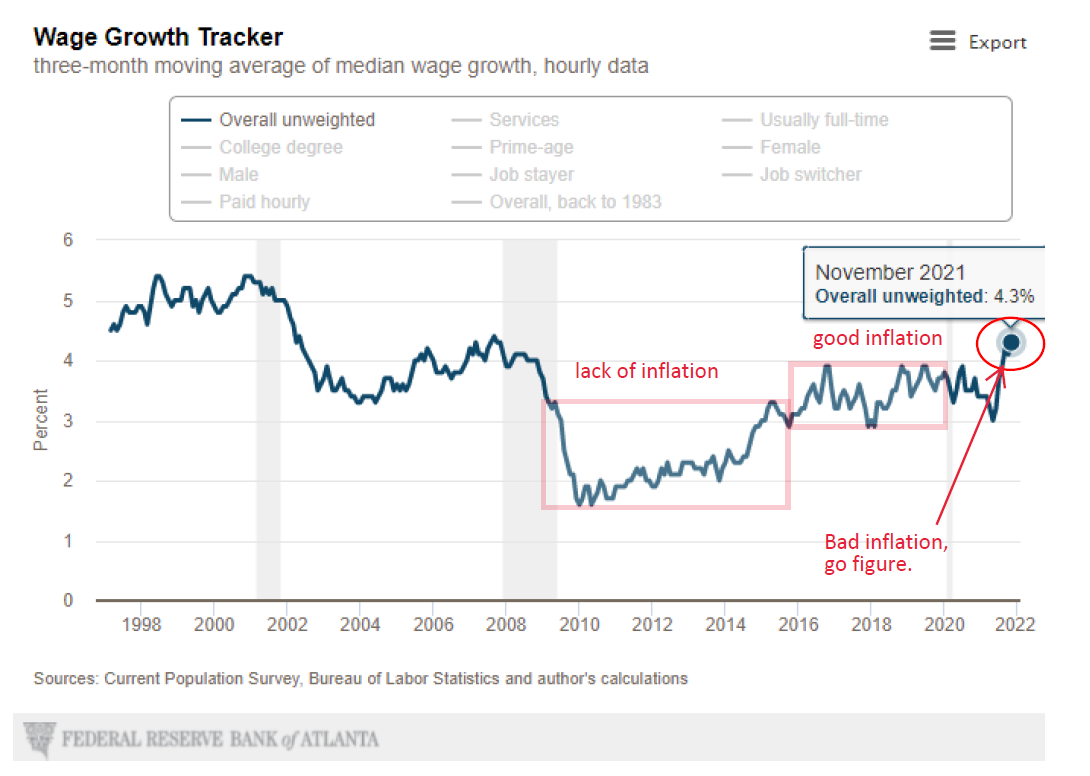 Except costs are going up at 6.8% (even if we strip out food and energy, the Core CPI is +4.9%) and wages at “only” 4.3%. I’m no math major, but it looks like the collective “we” are going backward by 2.5% over the last year. Something must be wrong with my calculation. Calling Dr. Sheldon Cooper. 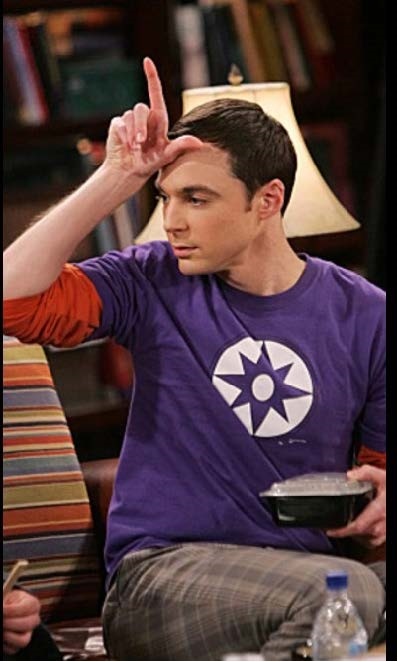 As if our constant mocking of our Federal Reserve system wasn’t enough (and it should be), throw on Scott Minerd and now even Allianz Chief Economic Advisor and past PIMCO CEO (and also thought to be a good nominee for FED Chair), Mohamed El-Erian. He’s saying the FED’s use of “transitory” was the worst inflation call in the history of the FED.

REALLY? The worst EVER??? Now, I’ll agree to an extent. We’ve said the transitory word was not the greatest word, but worse, in my opinion, was the stated FED policy of not raising rates until 2024. Seriously, did anyone really believe that? Well, the market did (mostly because the market is like a 2 year old…it wants what it wants until it doesn’t want it any more). Then it will throw a tantrum.

I have a vote for the worst inflation call in history, or at least the worst FED policy mistake ever. That would be cutting interest rates as the Tech bubble is inflating in late 1999. Why was this happening? I kid you not that it was because they were afraid that Y2K was going to mess every computer in the world up. Remember that? And that set the table for the 2000-2002 bear market and it also set FED policy mistakes for the following 20 years. As we’ve said before, if the only tool in your toolbox is a hammer, all problems look like a nail. Were computer date issues going to be fixed by lower rates and cutting reserve requirements?

I don’t have to say again my feeling of the FED, but I will tell them (because I know they read our weekly piece), be careful how much you want to raise rates. I’m in the camp of Scott Minerd of maybe one or two, and beyond that may be the ditch you are looking to avoid. But what do I know? 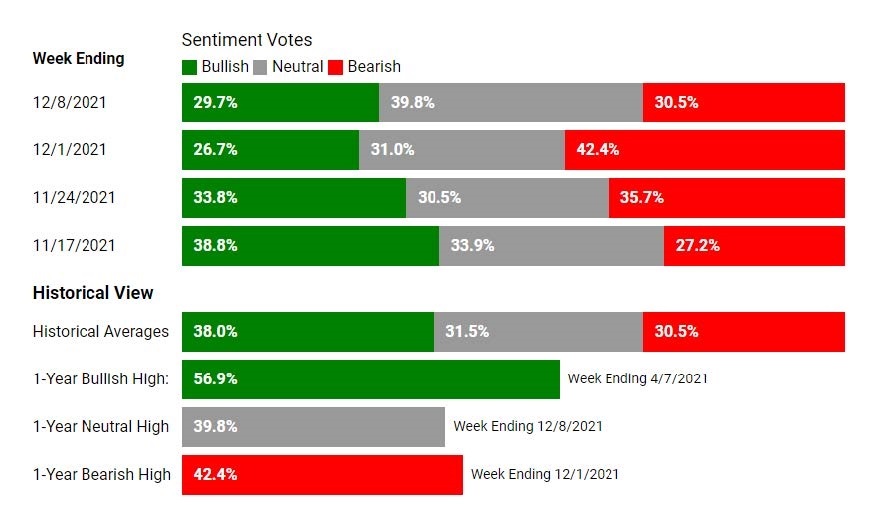 As you can see above, sentiment is as bad as it’s been this year, with the bearish sentiment hitting a high on December 1st. If we can get the narrative off the notion that the FED is behind the curve and poised to raised rates too aggressively, perhaps we can have the Santa Claus rally everyone wants. But for now, we are stuck in negative sentiment and really oversold technicals, not to mention we are likely at peak tax-loss selling this week.

That’s it for now. Have a great week and a joyous Christmas season. We appreciate you all in immeasurable ways. You may hear from us next week (we’ll be around), but if you don’t, we hope you don’t see that as our Christmas gift to you 😊.