Encouraging Progress. Where do we go from here?

A (long) year ago we were just getting ready for the second wave of COVID-19, had just started to figure out what effects it would have on all of us, and had begun (perhaps prematurely) dreaming about how to move forward in our new post-pandemic world.

Fast forward a year and here is what the COVID-19 infection chart looks like now. New cases are as low as they’ve been since the first wave and the initial shutdowns happened. Encouraging progress. 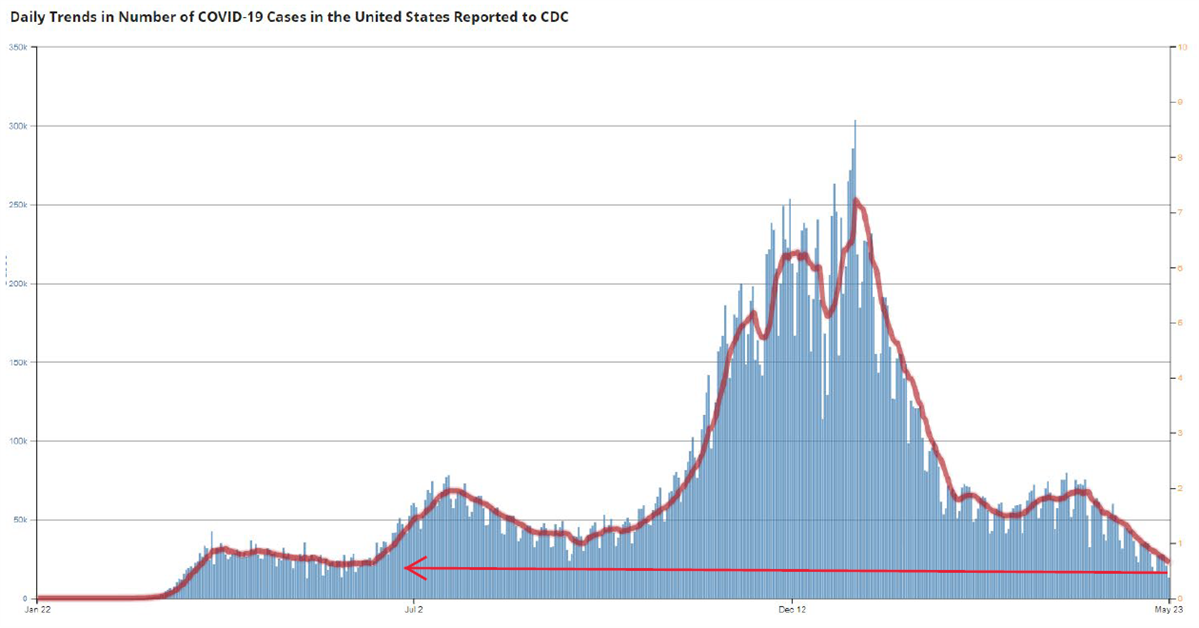 Now, of course, many have received their vaccination shots, thanks in large part to ‘Operation Warp Speed’ and the massive money spent on research and development of the vaccine. Kudos and many thanks to all of the very smart people that helped make these vaccines a reality. As a result of these monumental efforts from many, we currently have four vaccines approved for emergency use and at least one more on the horizon. You can see in the chart below that roughly 40% of the US population is fully vaccinated and almost 50% have had at least one dose (163,000,000 people). 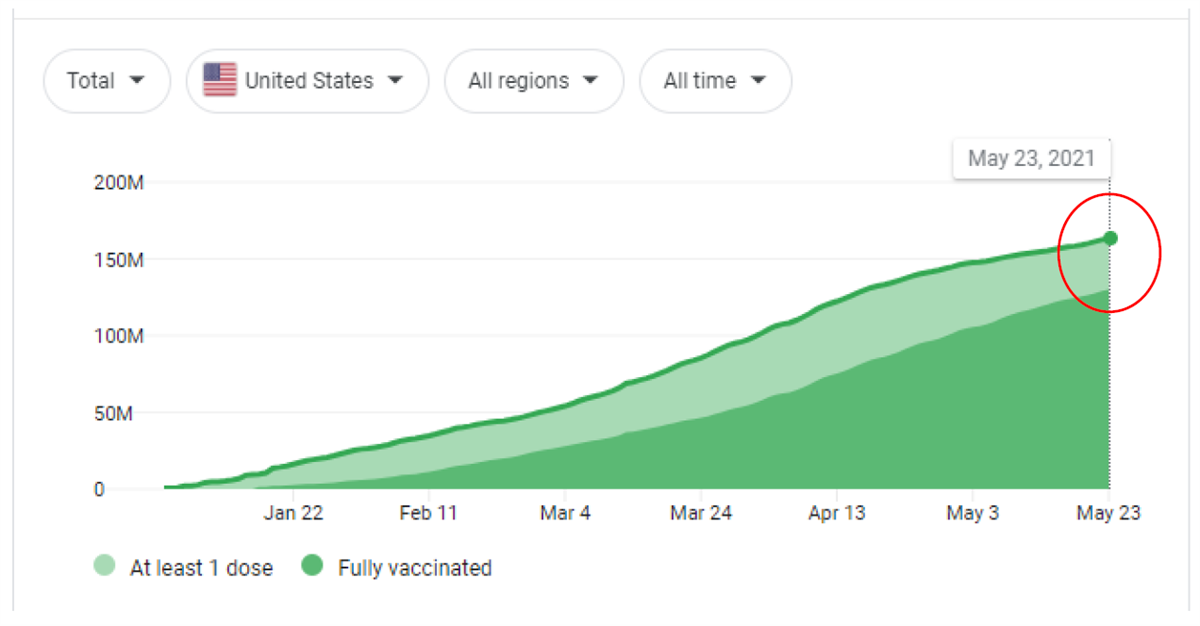 Add to that the estimated 33,000,000 that have already had the virus and you are closing in on almost 200,000,000 people that are immune to one degree or another (out of ~350,000,000 people). That doesn’t include the people that were asymptomatic or naturally immune for one reason or another. Most “experts” see 70% as the level for herd immunity, and we appear to be close to that number now and will likely get there by mid- to late-June. Encouraging progress.

Cities and States are reopening, with restaurants, lodging, and travel the last to enjoy the benefits of this restart. So where do we go from here?

It is likely, in my opinion, that we will see COVID turn into a manageable virus, although please remember that the sole motivation of a virus is to mutate for its survival and at some point, it will mutate enough that our current vaccine may prove significantly less effective (much like the flu vaccine, which usually hovers around 30% efficacy). That said, we trust those same smart people that brought us the vaccines to keep these vaccines ahead of the curve.

Air travel is almost back to 2 million traveler throughput per day (closing in on 2019 pre-pandemic levels). If you tuned into this past weekend’s PGA Championship (hats off to Phil Mickelson), you’d be led to believe COVID doesn’t exist on the shores of South Carolina. Restaurants in many states are fully reopened, while states like Washington, Oregon, and California are closer to 50% occupancy. As an anecdotal reference, I went to a new brewpub in my area and it was packed. Inside, outside, little social distancing, very few masks and most didn’t seem to mind it. Will this be a super-spreader event? Doubtful, but we will see.

So where do we go from here?

The widest unemployment measure (the U-6) is down to 9.9 million people, from over 22 million in April of last year. Here’s what’s interesting to me. The following is a ratio of unemployed persons per job opening. It is quickly coming down to the lows of 2018 and 2019. The ratio is 1.2 unemployed for each job opening. 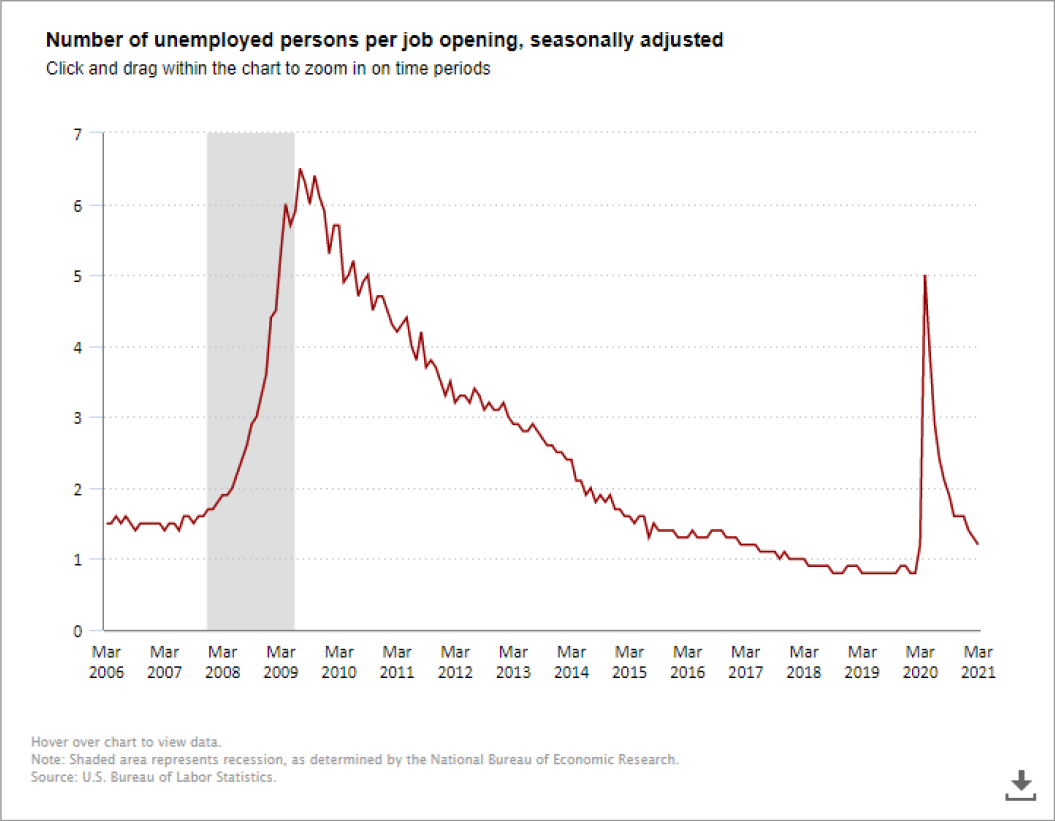 That should be a good thing and should likely push wages higher as it gets more difficult to find qualified labor. Speaking of qualified labor; in a world that is ever-more complex, one of the biggest problems we have is the mismatch between skills and jobs. I have spoken about this before, but, in my opinion, we need more training on-the-job for those positions that don’t require a college education. If we break down the unemployment by education, you get a better picture of the unemployed. If you have a bachelor’s degree or higher, your unemployment rate is around 3.5%, but if you have less than a high school diploma, your unemployment rate is almost 10%. 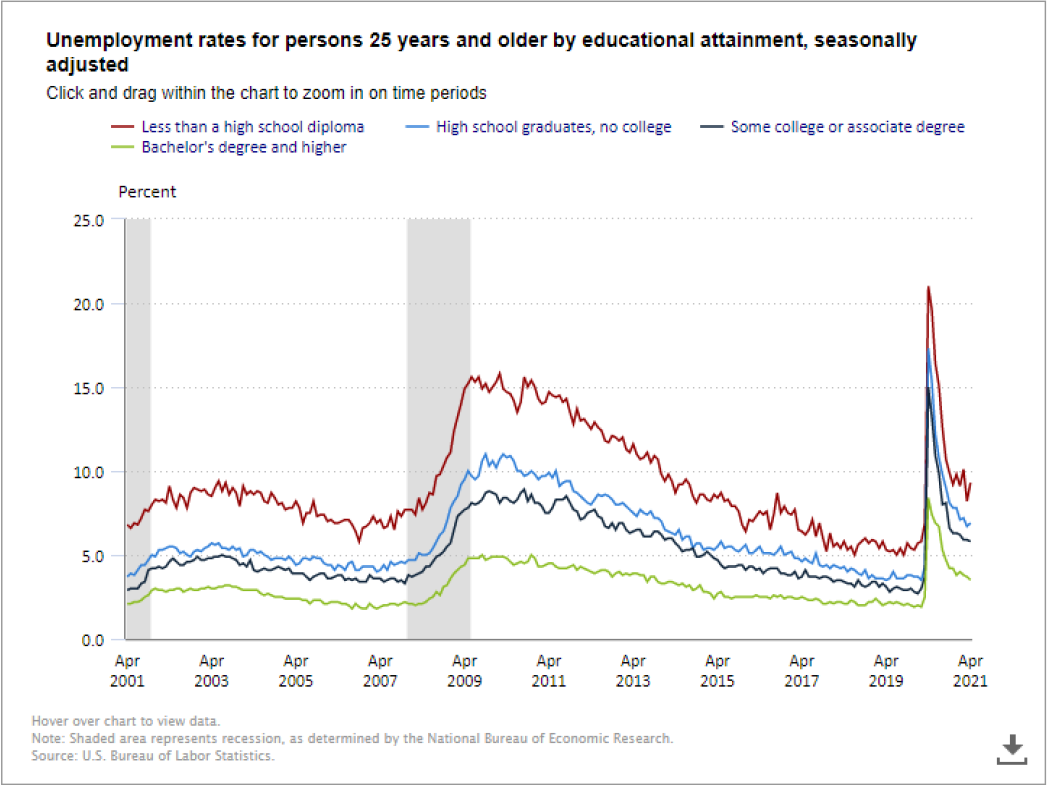 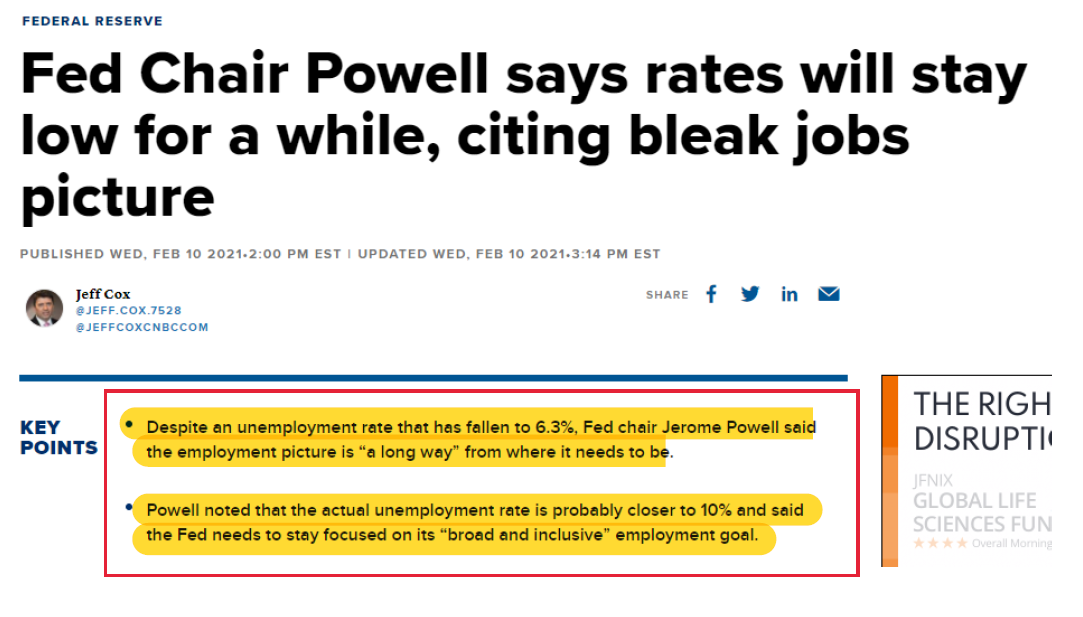 When Jerome Powell says, “broad and inclusive,” the red line above is likely in his bullseye. And maybe rightfully so. But at what cost?

Many have heard the “I” word again lately and have probably notice its effects.  The “I” I’m referring to is inflation.  Below is the recent headline inflation number posted a couple weeks ago.

The Federal Reserve shows no slowing of their “support” for this economy.  See the following chart.

Add to that the fiscal stimulus that the government has sent out and an infrastructure deal that is now “only” $1.7 trillion and you have the recipe for inflation. Will it be “transitory” like the FED thinks or more chronic? Only time will tell on this one. I think you know my opinion (hint, I’m actually somewhere in the middle).

Finally, some of the supply chain issues will slowly be working their way through the system, but in the process, we will start to see some inflation pressures subside. See the chart below for lumber futures. You can see that the lumber market is in what is called backwardation. This is a big word that simply means that the future prices are lower than current prices. This suggests that the market believes prices will come down (Andrew needs to build a fence to keep his ever-wandering 2-yr old contained…so he’s hoping for such!).

Below is the September chart and you can see the lumber prices have come down over the last few weeks, as Canadian lumber mills have increased production by 20% year over year. We’ll see how much this ramp up in production does to help the outlook, as we do have to remember trees aren’t grown overnight! Regardless, encouraging progress. 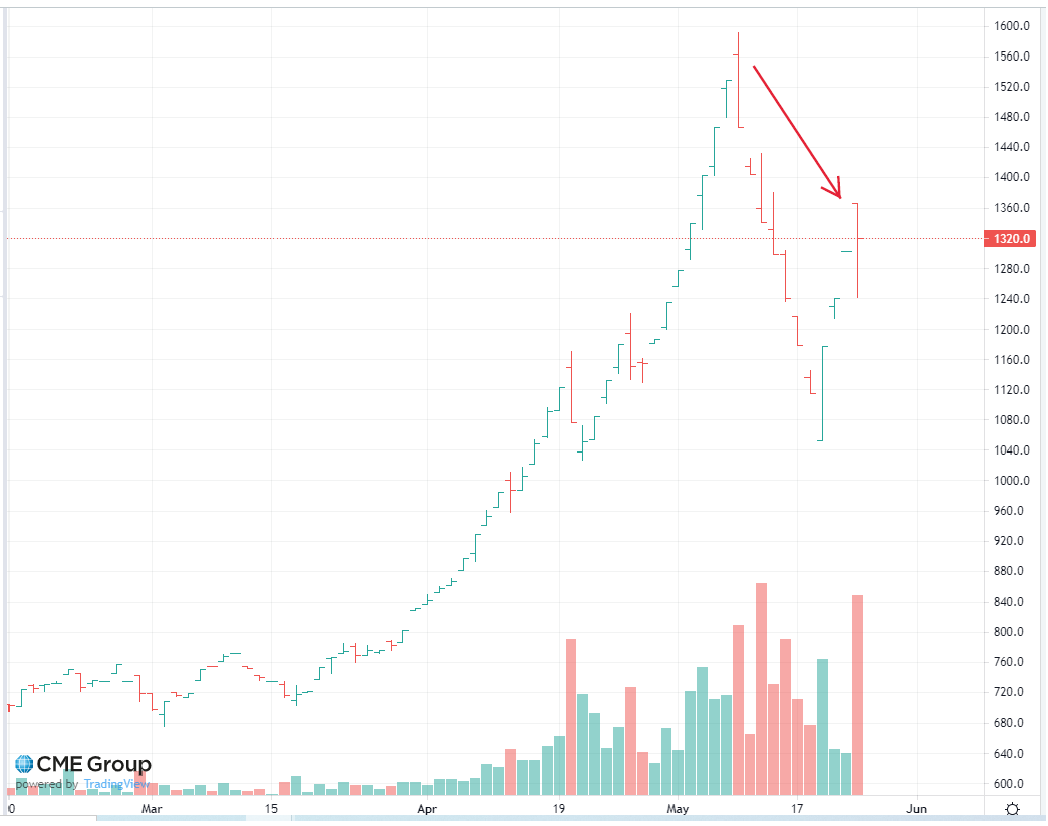 So as raw goods peak and come down in price labor will still likely be in short supply. Those two factors will to some degree offset each other, with the result being higher medium-term inflation, trending down to the longer-term averages.

So where do we go from here?

The economy continues to improve. The labor market continues to improve. Pavlov has trained the market to expect and “need” continued stimulus, and as long as that happens, prices will go up. When does that change? Our over/under bet is middle of next year, but then they will be behind the curve…as usual.

I hope you all are feeling upbeat as well and, as always, we will keep a watch out for things changing. Until then, let’s continue to celebrate the encouraging progress and keep things moving the right direction. The ever-increasing freedom we’re enjoying right now won’t be easy to give up a second time around.  Have a great week.