Earnings at the Halfway Mark

With second quarter (Q2) earnings season essentially at the midpoint, we thought a quick halftime report might be in order. Bear in mind, we have a ways to go in this reporting cycle, with more than 1000 companies ready to announce results this week, including 130 S&P 500 members, most notably Apple teed up after today’s market close. Based on what we have seen so far, the positive tone established up to this point is likely to remain in place.

At the macro level, we continue to observe positive indicators including broad-based growth, record earnings, numerous positive surprises, and favorable (meaning upward) revisions in forward guidance. Importantly, the pace of earnings and revenue growth is strong relative to expectations coming in. The blended growth rate for the quarter, which combines the actual growth for the 286 S&P 500 members that have reported with estimates for the still-to-come 214 index members, is expected to be up 9.2% from the same period last year on +5.0% higher revenues.

With total earnings estimated at $292.2 billion, Q2 is on track to reach a new all-time quarterly record, surpassing the 2016 Q4 level of $288.2 billion. This record isn’t expected to last very long, with each of the coming quarters expected to bring in ever bigger earnings tallies. 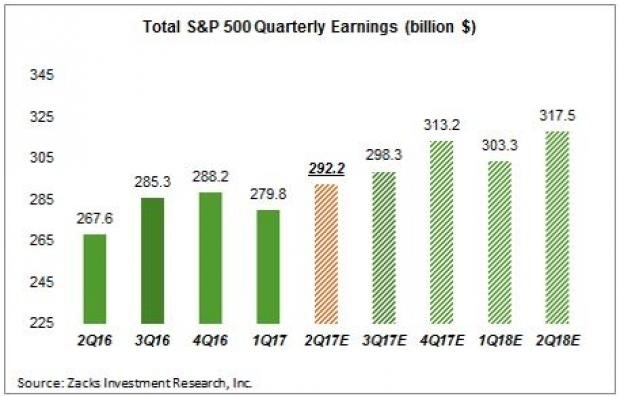 Importantly, Q2 growth is broad-based and not dependent on one or two sectors. According to Zacks Investment Research, whom we cite frequently during earnings season, while there is a notable contribution from the finance, technology, and energy sectors, 12 out of 16 (75%) of the major S&P sectors are on track to produce more earnings than the year-earlier period.

While the investment world waits for Apple to report, the news so far on the earnings front, while perhaps not as scorching as the expected heat wave this week here in the Pacific Northwest, is encouraging nevertheless. Enjoy the rest of the summer, and stay cool if you can.