Dare I say there may be some Green Shoots?

Happy New Year! While the calendar may have turned, I’m going to start by going right back to where I left off in stating the FED (and their global counterparts) runs the proverbial car from one ditch to the next. Keeping rates too low for too long coming out of the 2008 financial crisis…keeping rates at zero for too long coming out of COVID…while injecting massive amounts of money into the economy. I said this many times in 2022 (and for the last 20 years for that matter). I don’t want to belabor the point, but it is important to keep in mind as we flip to a positive in this first blog post of 2023 – looking at potential “green shoots.”

Before we look at the green shoots, let’s briefly finish our point on the FED’s driving skills. With prolonged zero rates and massive liquidity infusions, it’s no small wonder we had an inflation hang over. They now risk overreacting to on the tightening side. If history is an indicator, they will likely raise rates too far and hold them there for too long, causing a recession.

I have a secret for you…don’t tell anyone!

THE MARKET ALREADY KNOWS THAT!

2022 was the worst equity market we’ve had since 2008 and one of the worst bond markets since the 70s and 80s. Will the market get worse? Opinions vary, but I think there’s a better that 50/50 chance the equity market hits new lows before it bottoms (that’s my personal opinion and I have nothing to back it up other than experience and a gut feeling).

But let me say one more thing before we talk about green shoots.  Some of my best decisions have “felt” the worst at the time, especially in investing. When you push the buy button and you feel like you want to throw up, history says that’s the time to buy. But it’s hard! Are we there yet? I don’t think so, but we’re getting closer.

Ok, enough nonsense.  Let’s get into the green shoots. After all, I promised earlier a positive view for this New Year’s edition.  One of the first uses of the term green shoots was the UK Chancellor Norman Lamont when he described the recovery of the UK coming out of the 1991 economic downturn. More famously, it was used by Ben Bernanke coming out of the financial crisis in 2009. Now, you know my position on too much government intervention, but there is a time and place for the government to lend their unlimited balance sheet and spending power. Hint, it’s not when the economy is in decent shape! It is when the economy is in a funk and has lost confidence. 2009 was an example of that. Of course, keeping interest rates low through 2006 (coming out of the Tech crash and 9/11) helped spur speculation in housing and created liar loans and so on. So yes, once again, the government was being called on as the lender of last resort to “save” the very economy they broke by their errant policies in the first place, but I digress. Here are Bernanke’s quotes from a 60 Minutes interview (you can watch the piece here if you want):

So, what green shoots could be showing up now? Keep in mind the market looks 6 to 9 months into the future, whereas you and I look at today’s headlines.

Let’s start with the market valuations. You can see that the S&P 500 is still overvalued, but much less so than it was a year ago.

But that’s only one part of the picture. Keep in mind that the market cap weighted S&P 500 is still dominated by the top 5 or 6 companies, though not nearly to the extent it was a year ago. Take a look at the chart below. 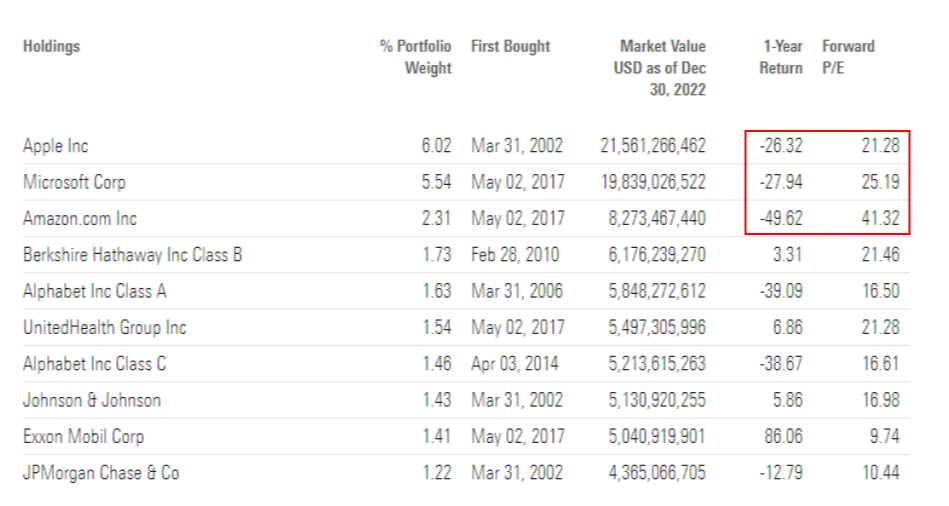 You can see that the three biggest names are the tech stocks that held the biggest weightings a year ago. They still have those positions today, despite significant drawdowns in 2022. Now look at their Forward P/E ratios to the right. They are all above the average of the S&P. Now let’s take a look at the equal weight version.

By equal weighting (rather than the default capitalization weighting), we reduce the impact of those largest (and most expensive) companies, in favor of a smaller (in size) and more diversified group of companies. The result is a lowering of the price/earnings (P/E) ratio.

That’s a decrease of 25% in the average P/E ratio across the portfolio. My point here is that the “market” is not really overvalued once you take some of the “highflyers” out of the mix.

Onto another topic, money supply growth has slowed significantly from the highs of the pandemic.

The chart above is not updated for the 4th quarter, so let’s look at a month-to-month level.

On a year-over-year basis (November over November), M2 was essentially flat. That will likely lead to inflation coming down significantly over the first half of 2023. Which begs the question; if inflation is coming down quickly, why is the FED still raising rates? The short answer is they are looking at backward looking numbers (mostly housing costs and labor at this point). When it becomes apparent that those two data points are coming down, the FED will already be behind the curve (already in the other ditch). Which will cause them to start cutting interest rates. Which now brings me back to my green shoots.

If the market looks 6-9 months out, maybe the markets are telling us something. No, not the stock market yet, but the bond market. It’s the first to say something’s wrong and the first to note the turn. See the two charts below (10yr/2yr and the 10yr/3mo): 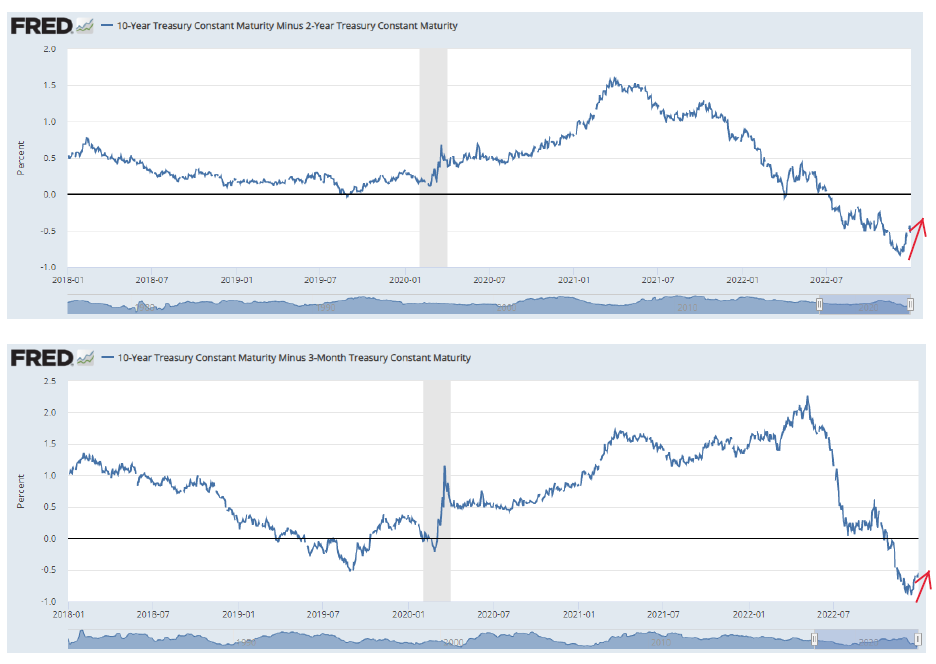 Keep in mind that the 10 year/3 month is largely controlled by the FED, but the 10/2 is not so much.  Now, as you can see, the 10/2 spread (the difference in interest rates between the two bonds) peaked in March of 2021 and has rolled over since. The 10yr/3mo didn’t turn until the FED really started to raise interest rates in May of 2022. Interestingly enough now, they are both starting to tell a similar story. What’s that you ask?

The bond market is starting to say that the economy will emerge from this recession and start to grow again. After all the headlines about interest rates going up, look at where the 10-year Treasury is. You can see that it peaked in October and has come down since.

Does that mean we’re out of the woods yet? Probably not, at least as far as the stock market is concerned. But if the bond market is starting to sniff out the end of the recession, the stock market will follow not too far behind (the bond folks love to brag they are the smarter side of the markets!).

What this does mean is barring the FED recklessly raising rates way beyond where they should be, you should expect a recession, followed by a recovery later this year and into next year. If they can’t seem to find common sense, then all bets are off. We still are bouncing in between areas of support and resistance from a technical perspective. 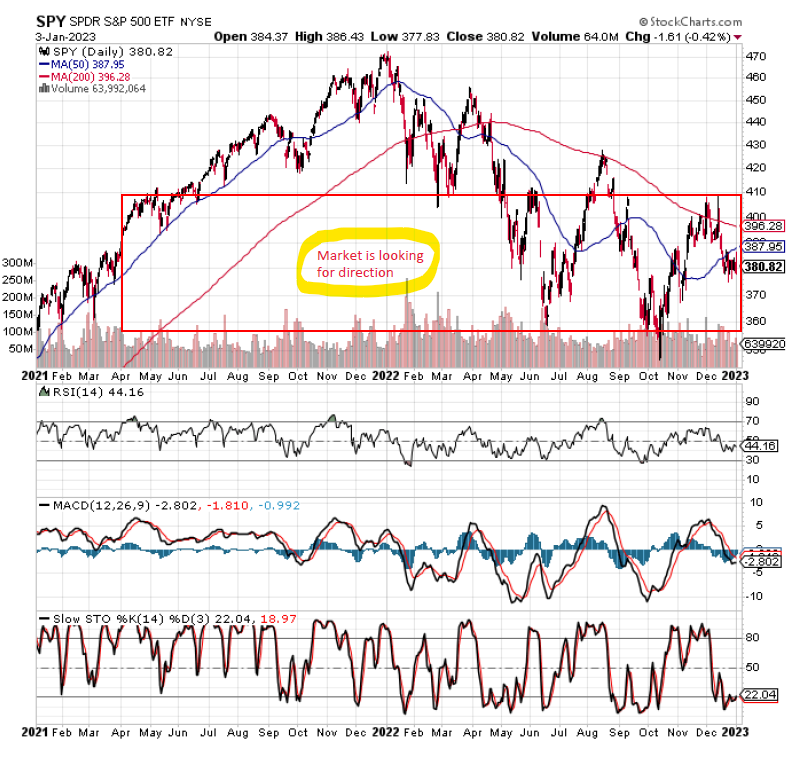 That’s enough charts to welcome you into the New Year! We look forward to serving you in the year ahead, and perhaps being able to talk about more than the FED! Regardless of whether that wish comes true, have a Happy 2023!