Big Week for the Markets

War rages on in Ukraine. I have a good friend from Ukraine (he lives in the US now). His wife recently joined him here in the States as well. With this connection, I have been seeing things that most don’t see on the news. Let’s keep praying that common sense prevails and more deaths can be avoided.

Obviously, the market has the Ukraine war on its mind, as well as the corresponding inflation that is being bolstered by it. No, Putin is not responsible for all inflation, but he does get the blame for some - most notably a spike in oil prices (see below). You can clearly see where the war started and sharp spike in prices late in February. 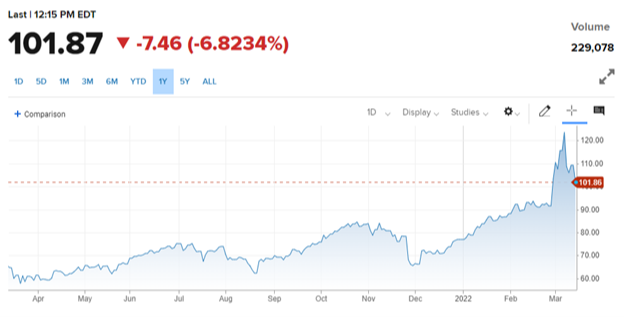 I’m sure you have also noticed the spike at the gas pump as well. If you haven’t experienced it, you likely will. You can see that those charts look pretty similar, as they should..

Remember, petroleum is a major input, not just for gasoline, but many other everyday uses as well.  Take a look at the illustration below. 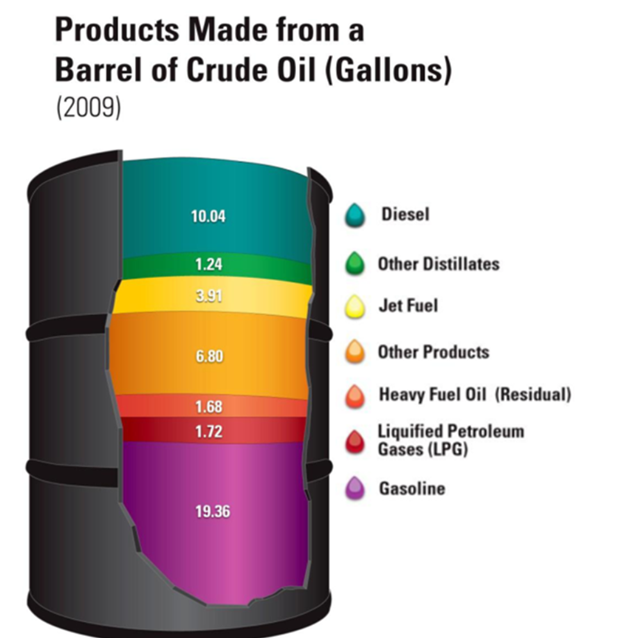 A 42-gallon barrel of crude oil yields about 45 gallons of petroleum products (nobody said there would be math involved). Anyhow, almost 40% of the barrel is refined for gasoline, but another 1/3 is used for diesel and jet fuel. Anybody seen the fuel surcharges going back into the system now? My old flight school just sent me an email that said they were instituting a new fuel surcharge for all flights.

I was watching an interview with the president of a farmers coop. They were discussing the ability of the US to fill the gap for reduced crop yields from the Ukraine and Russia. He said they could, but even though our fields are very fertile, they are not endlessly fertile. In order to help the crops grow they need Phosphorus, which takes a tremendous amount of energy to create. With the price of energy going up, it makes the cost of Phosphorus more expensive as well. So gas prices are up, diesel prices that semi trucks use to deliver goods is up, jet fuel prices are up (better book your vacation flights sooner rather than later), grains prices are higher (which are food stock in some cases for livestock), which makes the prices for livestock go up… Seeing any trend here?

Anyhow, a few weeks ago I shared an inside look at inflation.  We now have the monthly number for February 2022 – 0.8% month over month, which brings the year over year to 7.9%

You can see that March through June the month-over-month numbers averaged an annual rate of 8.4% inflation. At this point, all bets are off as long as the war in Ukraine continues, but longer-term, it will be difficult to sustain that type of inflation.

Meanwhile the Federal Reserve meeting concludes on Wednesday, and market participants expect a 0.25% increase to the FED funds rate. Take a look at the target rate probabilities below. I’ll go ahead and say that’s 100%, with a slight chance they could raise 0.50% (very unlikely). 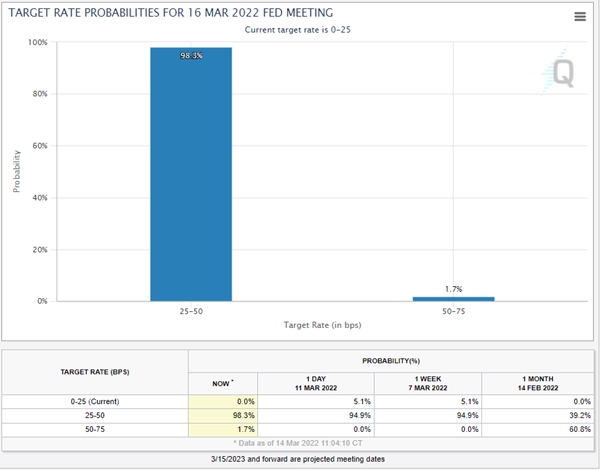 So high inflation, a war in Ukraine that is pushing energy inflation higher in the short-run, a Federal Reserve that is behind the curve as far as rates are concerned, and an economy that appears to be slowing down of its own accord.

No wonder the markets have been struggling. What is likely to turn things around? The war in Ukraine ceasing would certainly help, but it really is likely to be the FED realizing that they shouldn’t raise rates as much as they think and backing off the rhetoric. Nothing like the market to get the attention of the FED.