Do you remember the movie Back to the Future, with Michael J. Fox? For those that have been in a cave for 35 years, it was a movie about going back in time (first just to see if it could be done), with the help of Doc – a man who had what we would now call “COVID-hair.” If you remember, it was in a futuristic DeLorean. Very fitting. The only problem was, once he was back there, Marty (Michael J. Fox) would inadvertently meet people and change the future, including almost assuring his mother and father never got together. So what does that have to do with the markets?

While we aren’t going back in time to “fix” things, we are trying to “fix” things on the fly – with the only thing we can think of…money. Not money to build things and not money to further research and development, but money to plug the hole that we made. I’m not saying that is was right or wrong (ok, maybe I have my opinion), but the fact is, the entire world stopped a large part of the global economy to get a handle on COVID-19. We won’t know if what we did was the right thing to do until long after, if ever. And unlike the movie, we won’t be able to go back in time to see what would have happened if we had made different choices.

At this point, we now have to play the cards we dealt (to ourselves). In previous blogs we discussed Zombie companies and how there will be a lot of them going bankrupt. In case you didn’t hear, over the weekend the number one car rental company filed for Chapter 11 bankruptcy. Is that any big surprise?  Not if you’ve been paying attention, because the definition of a Zombie company is one that is already dead but doesn’t know it yet. They had already laid off 20,000 employees, with more now to come during the course of the proceedings. Hertz bonds that were issued in November of last year had risen in price to 104.50 on February 21st closed Friday at 12.00 (those are cents on the dollar). I had to do the math twice to make sure I did it right. That represents a loss of about 90% in 3 months (think everyone realizes it’s a Zombie company now?).  I guess Avis will have to update their marketing…as they aren’t #2 any longer! 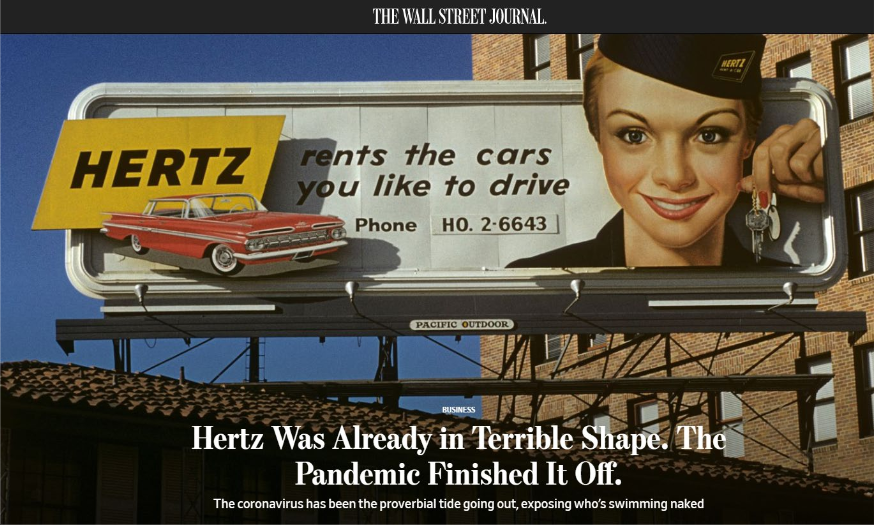 But in an effort to save companies that we forced to close, our duly elected government (like it or not) voted to “give” people and businesses a $2.2 trillion stimulus.  On top of that, there was an additional $310 billion Paycheck Protection Plan extension because the first ($350 billion) tranche ran out quickly. Add to that the US House of Representatives passed a $3 trillion stimulus bill (that apparently has no chance of being implemented) to continue to help people get from one side of the valley to the other. In addition, there is talk about $2 trillion for infrastructure spending. And this is just the US government. It doesn’t include all the other countries doing roughly the same thing.

Did I say that was just from the fiscal side of the government? You may remember this chart, from a month or so ago. The Federal Reserve has injected over $3 trillion into the economy in the last few months (see the chart below). Is there any wonder why the market has been going up? And apparently, according to Fed Chair Powell, there is no limit to how much they can do. Boy am I glad to hear that.  Everybody gets a trophy this year! The Fed’s buying Treasuries, Mortgages, Corporate bonds, High Yield corporates, and some say equities through third party entities (but that’s just speculation). This is truly unprecedented here in the US, though it’s quite reflective of what’s been happening in Japan for quite some time (we arguably little benefit). Remember, money is only a concept and there is no amount of money printing that could lead to a bad outcome.

Finally, it seems appropriate to show one last chart today.  Many people believe that to have a healthy economy, you need a healthy banking system. If the “markets” are doing well, you would expect the banks to be following suit. Take a look that the chart below and draw your own conclusions. There are a lot of stories out there, and you can accuse me of cherry-picking my story, and maybe you’re right. For now, we all have to have a viewpoint. If businesses are able to come back like nothing ever happened, then the volume of stimulus may have been unnecessary, and the markets are likely to roar to new highs. If, however, many shuttered businesses will not reopen, or reopen and not be able to be profitable, we will have a more long-lasting impairment that will need to be filled by…you guessed it, more borrowed money. We just don’t see how this pattern is sustainable. 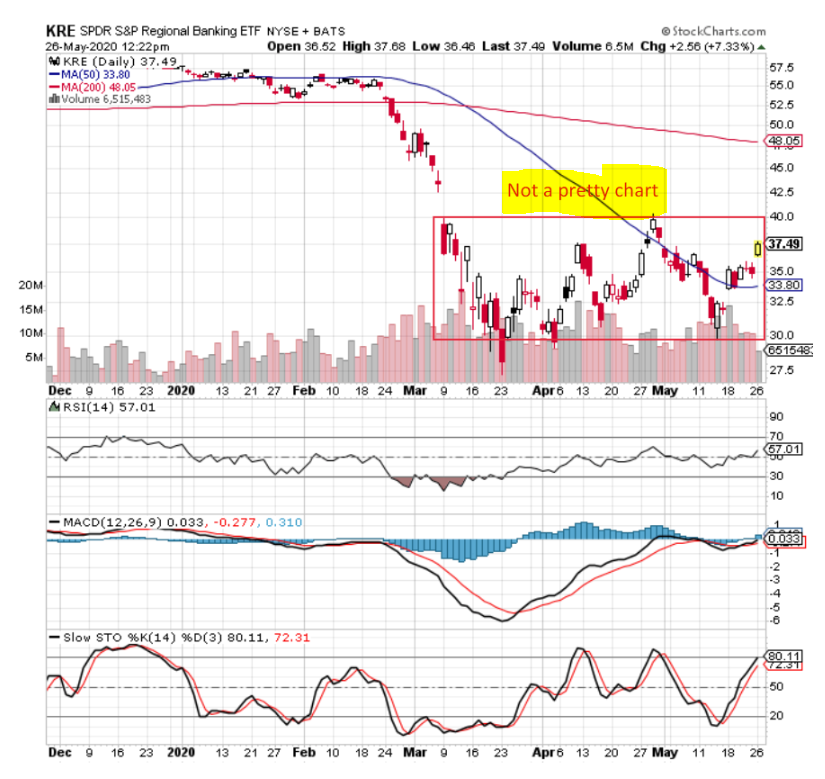 Until we know more, we will continue to be cautious.

Most importantly, we hope everyone had a nice Memorial Day and continue to do the prudent things for your situation and health.  As always, we welcome your comments and questions.