Are we picking up pennies in front of a steamroller?

But does that mean it is always up? Of course not. There will be pullbacks and volatility along the way. That’s how the markets work. In addition, the markets tend to go from ‘overbought’ to ‘oversold’ and back again. That reality is mostly based on psychology and momentum. With that in mind, let’s take a look at those two elements to figure out what we might expect in the near future (I’m putting on my Carnac hat now). 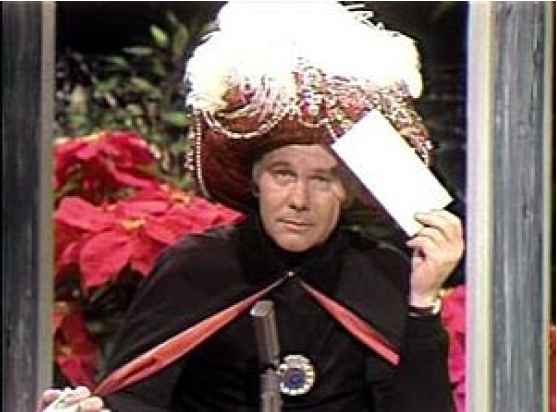 Momentum is very positive right now, but as we know, it only looks at a defined time period that defines your investment horizon. For example, we are generally long-term investors and therefore we use longer-term time periods to define what momentum looks like. Below is a point-and-figure chart that shows what momentum looked like around this time last year (the chart is from Feb 2019 to Feb 2020).  You can see that momentum was good and showed no sign of “pending doom”. 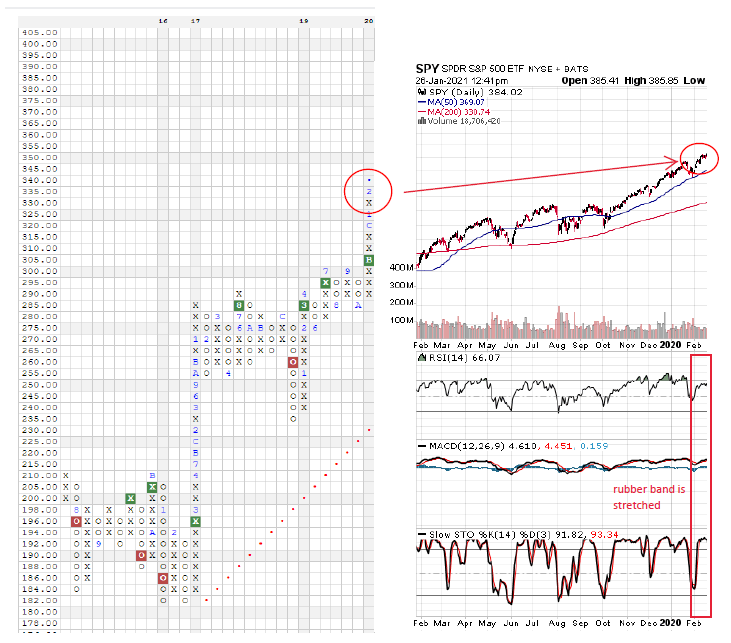 If we fast forward to the other side of that chart (next graphic, which shows the date range of March 2020 to today), we can see what we all know now to be true. It all broke down thanks to a pandemic and the ensuing shutdown of life as we knew it around the globe. 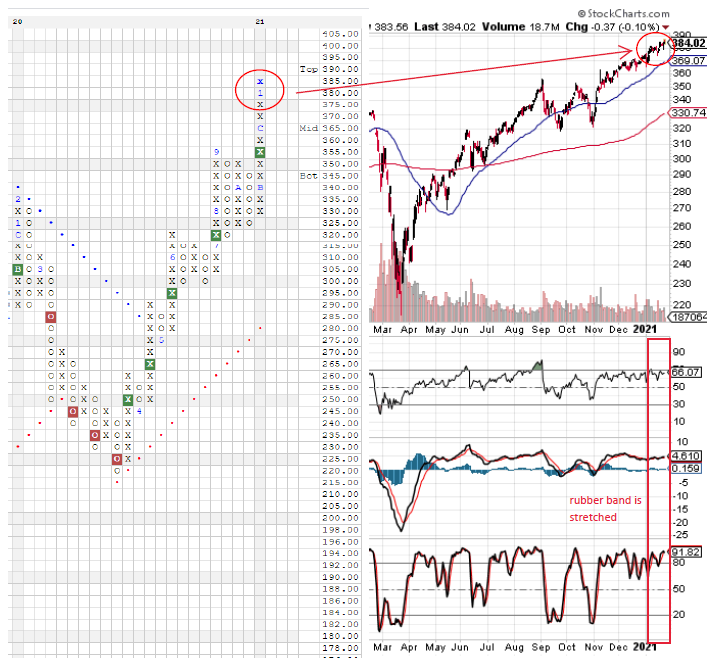 The important thing about momentum is it doesn’t give you any sort of timing of what is coming – and it’s not meant to. It keeps you invested through what we call the ‘wiggles’ (no, not the children’s TV show, but the small ups and downs in the market that everyone should be willing to accept if they are investing). Notice I didn’t say trading or speculating! So that is what tells us if we are going up or going down and whether down periods are within acceptable ranges based on risk tolerance.

If you go back up and look at the charts on the right, you can see evidence of how extended that momentum might be (lower three charts on the right side). These also don’t tell you exactly what the future holds but note the amount of energy (buying) it would take to keep the markets going at the current pace (think sprint versus marathon).

Now let’s take a look at Psychology. The following charts look at the market’s psychology in different ways, but they all say the same thing, sentiment is extreme. Can it get more extreme? Definitely. That said, we would say that you can only stretch the rubber band so far before it breaks. The first chart shows fund flows into leveraged funds (those that give you 2x or 3x upside, but don’t forget you can also see 2x or 3x on the downside). 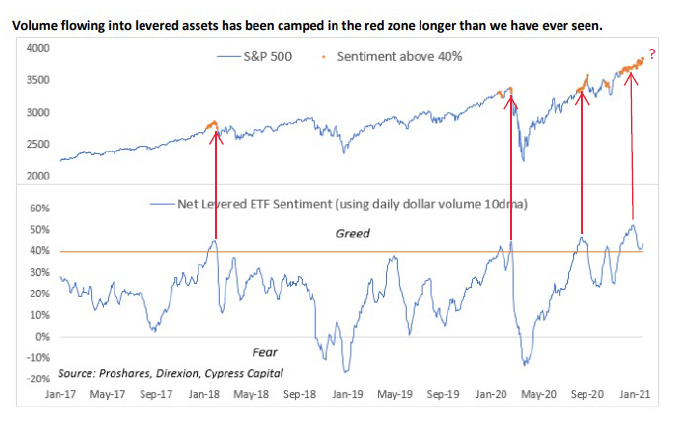 The next chart is a bit messy, but basically it looks at the “enthusiasm phase” of the market and its correlation to market prices.  You can see when the lower chart crosses the dashed line, the market tends to take a breather (or worse). 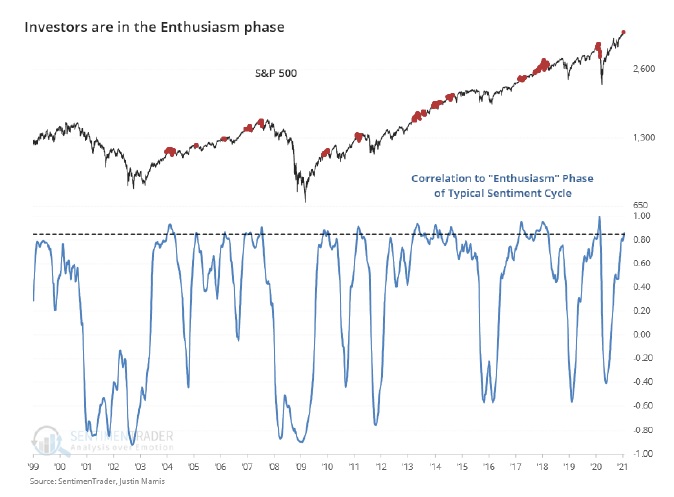 Below you can see small traders are speculating like they’ve never speculated before. 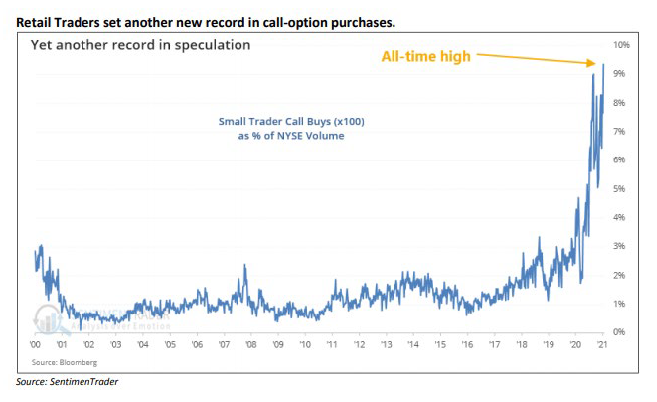 Below is one of the stocks that small traders are speculating on. You can see that the price has gone up a lot for a company that was close to bankruptcy prior to Christmas (Gamestop…yes, they are still in business). You can see most of the volume of trades have come in the last couple days. And like most stories like this, it will end in tears for most people in this trade. 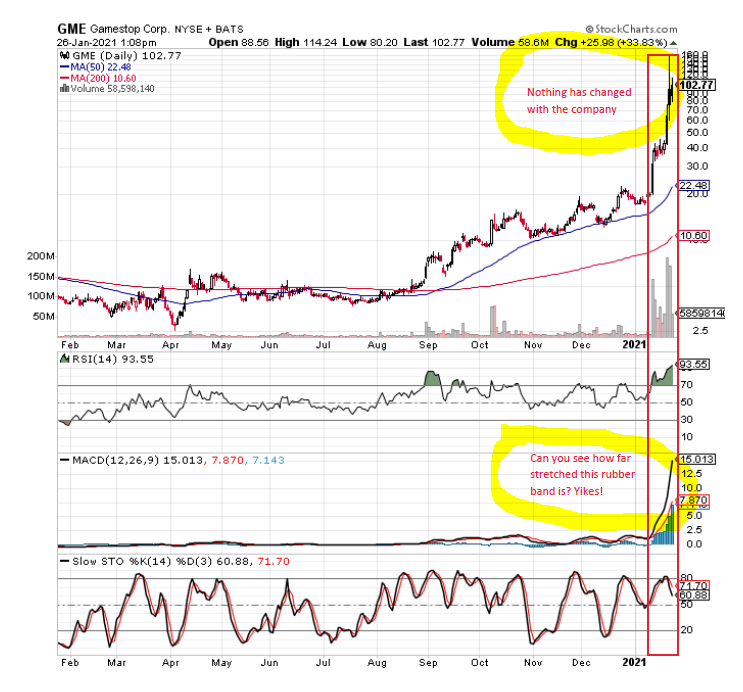 Since we’re not traders, it doesn’t affect us much, but it does point to the fact that there is a lot of speculation in the market and it comes at a time when prices have reached historically high levels. To finish the parade of charts, please see below from our good friends at Eventide where they show every valuation indicator they measure is above its historical average to varying degrees. 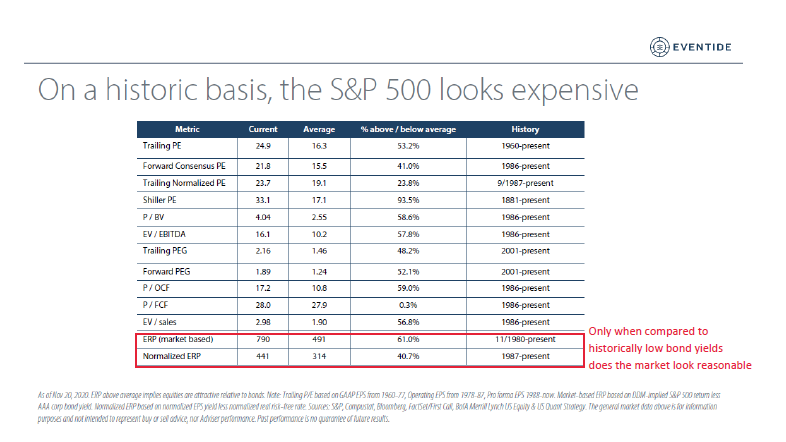 So while we still think there is room for the markets to move higher, at least on a short-term, there doesn’t seem to much holding it up other than the “greater fool theory.” We are treading carefully, as a result.

We hope you continue to stay healthy and social distance while the vaccines are administered over the next several months. Then maybe we can start to get back to something more normal. Take care and talk to you next week.