Another look at valuation and crypto

Like Yogi Berra said, predictions are hard, especially about the future.

The talking heads on CNBC will make many predictions (most about the future) and of those a small handful will turn out to be correct. Of course, they won’t mention the ones they were wrong on, but will tout the correct ones. We have appreciated the local sports radio station’s annual show where they review predictions made throughout the year. It’s entertaining…and informative…and we often wish the same level of accountability existed with the market prognosticators.

Given that, I was on conference calls all day yesterday, with “experts” telling their opinions of whether the market is expensive or fairly valued. And as always, there were enough predictions that some will prove out correct. The problem is determining which ones?!?

This first on is from Dr. Hussman looking at forward expected 12-year returns. You can see that it is a pretty high correlation with actual 12-year returns (red). As you can see (if you have really good eyes) the red line ends in 2009, because that was 12 years ago. If we look at the blue line, you can see that the expected returns for the next 12 years is around -2% per year for the 12 years from now. We have mentioned these forward expectations in the past and they all look roughly the same (between low single digits and negative returns). 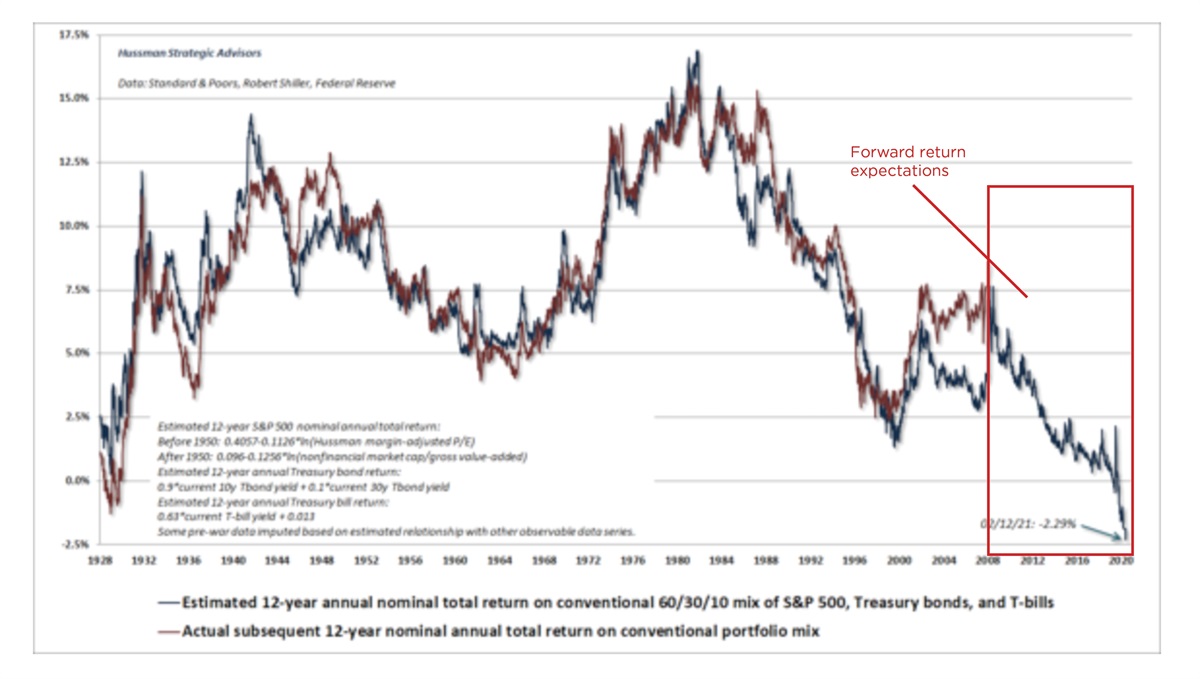 Here is another piece from our friends at Guggenheim Investments.

The chart above doesn’t look at valuations, so much as it looks at how the market is “acting.” Are markets expected to go up or down? According to Guggenheim, they expect that “risk assets” should do well for now. How that chart works is when the line goes below the -0.6 line (red) that would note a “bear market” period and when it crosses back above that level it would signify the start of a new bull market, until it crosses the 0.4 line (green). The current level is 0.32.

So what does this tell us? We are in a positive trending market that is very overvalued. I believe if you took a straight line between now and 12 years from now, it might end up being in that range of -2% to 4% per year. But I also think that there will be a period of time where the market will not be kind to those who are of the “buy and hope” strategy (I mean buy and hold).

Of the many possible ends to this bull market, one is the end of easy money and low interest rates (the FED taking away the punch bowl). As we’ve discussed many times in the past, there are big arguments about monetary stimulus and the effects of low interest rates for extended periods of time. For some, debt from the government doesn’t matter and can continue to expand forever without any repercussions. For others, it is a debt that needs to be repaid at some point either through austerity, significantly higher taxes, or inflated money. Notice that none of the three are favorable to you or to the economy at large.

I think you know where I stand. I think the debt will have to be repaid at some point (or at least the growth of borrowing has to slow below the growth of the economy). Politicians being who they are will opt for the easiest solution that will allow them to keep their jobs, and that is by inflating the money away. To that end, it brings me to my other topic of the day. One that we at MPCA have been thinking about for a long time (a couple years), and that is cryptocurrencies.

If you remember in the past, I have gone through what cryptocurrencies are, the most notable of them is Bitcoin. There are literally hundreds, if not thousands, of different cryptocurrencies (most of which will likely be worthless at some point in the future). Let’s focus on Bitcoin for now since it is the one that most people have heard about. The question is, should you own some?

Before I answer that, let’s build the case for and against it.

The argument against Bitcoin is that it isn’t real money and isn’t based on anything “real.” It’s just numbers in a computer. I certainly have sympathy for that view, but if that is true, what is a dollar bill? The further we get away from cash and towards using debit and electronic means of transferring money to others, the more we can say that the US dollar is effectively number on a computer. As a matter of fact, the Federal Reserve is looking at “creating” digital dollars (the Chinese just launched the “digital yuan”). 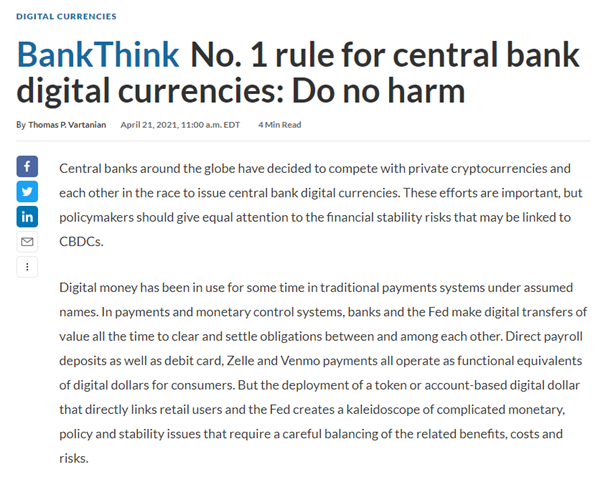 Along with the first argument, the second argument is that Bitcoin isn’t backed by anything, unlike the government currencies. Ok, so let’s take a look at what the dollar is backed by. The dollar is based on the “full faith and credit of the US Treasury.” Hold on a second, you’ve already lost me…“full faith”?  Yeah, you know that the US Government will always be able to pay their bills. They get that from almost 250 years of history and the ability to tax citizens as needed. And, of course, there is no chance that the US would ever default on their liabilities, right?  And after all, modern monetary theory (MMT) says that debt doesn’t even matter. In addition, we know that since the inception of the Federal Reserve system, the US dollar has been depreciated by 96%. Don’t forget, the debt the United States used to owe was backed by gold, which we went away from in 1971. I think one could argue, other than precedent, the US dollar is not backed by anything more than a promise to pay, and even then, we didn’t say what that money would buy at the time of repayment.

So what is the case for Bitcoin? I am going to keep this short, but invite you to read through Cathie Wood’s white papers, here and here.

The basics are a decentralized network verifying transactions (as apposed to banks or “trusted” intermediaries), nearly instantaneous transmission of money anywhere in the world, and a fixed supply that will never be exceeded.

I would argue that Bitcoin is not the ideal cryptocurrency for quick money transmission since each block is confirmed every 10 minutes. Some are truly almost instantaneous. Decentralized and a fixed supply to me are the reasons it is a viable “store of value.” Even FED chair Jerome Powell admitted that crypto is similar to gold as a store of value. The other part of what he said was talking his book, which is to say that he doesn’t believe cryptocurrencies are a means of payment (think he may have a vested interest in keeping the US dollar relevant?). I might beg to differ with you Mr. Powell. In the last 24 hours, there were more than $120B traded or exchanged from the top 4 cryptocurrencies.

I’m not saying this is a risk-free investment, but I am saying that at the rate the FED is printing money, that is not a risk-free investment either. If anything, you can bet that the future value of the dollar will be significantly less than what it is today. See the comments from Bill Miller (legendary investor).

There are still two issues on the table that give us pause. The first is logistics of taxation. The best vehicles right now through which to invest in cryptos creates a K-1 rather than a 1099 and would cause some people to delay filing their taxes on a yearly basis. That can be easily solved by only investing in a tax-deferred account.

The other is pending government regulation or banning of cryptocurrencies. There have been some countries that have “banned” crypto, but since there are no boundaries (thus decentralized), computers can be move to other countries to “mine” for these cryptos, making any ban effectively useless. I don’t think the US will ban crypto, but likely put some regulation around them.

Think of cryptocurrencies like the early version of the internet. Who would have thought 25 years ago that the internet would be as vital as it is today? Will crypto be that way in 25 years?  My guess is yes, what’s your thoughts? We know this is a provocative topic and we’d love to hear them!