Last week essentially marked the end of the second quarter earnings reporting season, and once again, results were very impressive. Total earnings for the S&P 500 bellwethers are up over 25% on over 10% higher revenues. This is the highest quarterly growth rate since 2010, slightly eclipsing the growth record set in the preceding quarter.

As the infomercial says, wait, there’s more. Nearly 80% of the S&P components beat consensus EPS estimates and over 72% turned in positive top line revenue surprises. As we will show graphically a bit later, the proportion of S&P 500 companies beating both EPS and revenue estimates, also known as the “blended beat rate,” is an eye-opening 61.5%.

The corporate earnings picture has been steadily improving over the last few quarters, a trend that has not only continued but actually accelerated into the Q2 earnings season. Significantly, earnings gains in Q2 have been broad-based, with notable top line revenue momentum. Additionally, the pace of earnings growth has reached a multi-year high, and the dollar amount of total Q2 earnings has set another all-time high.

Not only is the Q2 earnings growth on track to be the highest in many years, but the overall level of total earnings in Q2 will be a new all-time quarterly record. It is important to point out that the growth momentum on the revenue front is even more notable and pronounced than earnings momentum, which is very impressive in its own right. 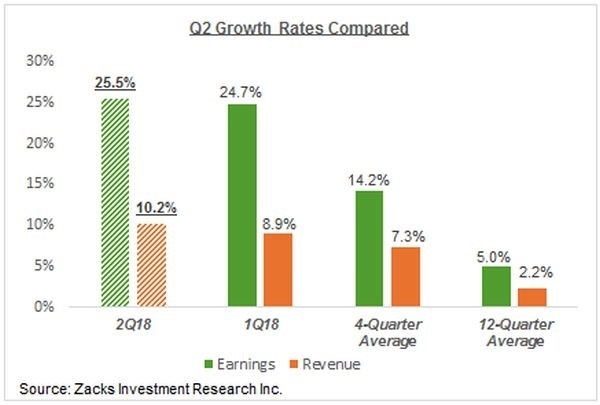 The blended beat rate, defined above as the proportion of companies that have beaten both EPS and revenue estimates, was impressive as well. 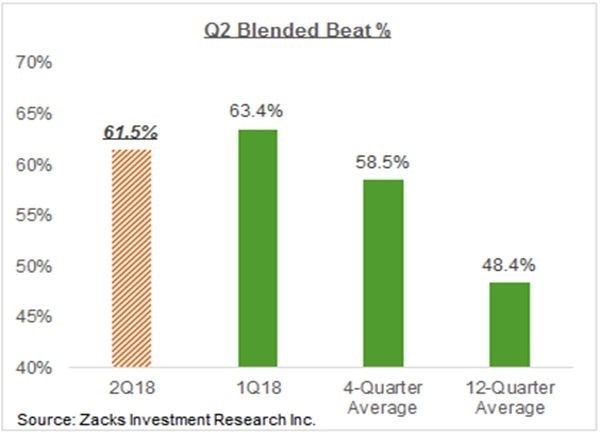 Another key sign of strength contained in the Q2 growth picture is its breadth, with double-digit earnings growth across almost every economic sector of the economy. It is worth keeping in mind that we had a similar level of broad-based growth and momentum in the preceding quarter as well.

Clearly, the earnings picture hasn’t been this good in many years. However, for the pessimists among us looking for the cloud behind every silver lining, there is cause for concern in the forward-looking earnings revisions trend falling short of the expectations sparked by the strength of the last few quarters.

Let us explain. For the last few years, the tendency has been for earnings estimates in the current quarter to come down (“negative revisions”) as the reporting cycle for the completed quarter would get underway. However, the past few quarters have seen the opposite, with estimates for the coming quarter improving rather than declining (“positive revisions”), a trend that became rather pronounced ahead of the start of the Q1 earnings season of 2018, and had continued until recently.

So with the improving revisions trend over the last few quarters, hopes were raised for a replay of that trend for Q3 and beyond. But we didn’t see that with respect to Q2 estimates. See below for the decline in expectations depicted graphically. 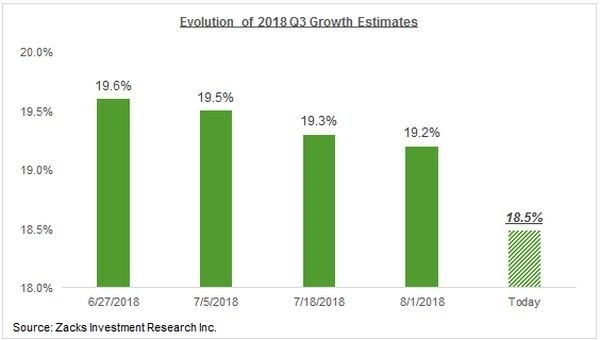 A big reason for the positive revisions earlier this year was the direct impact of the tax cuts. But other factors were at play as well, ranging from the impact of higher oil prices on energy sector companies to rising interest rates improving the financial sector’s earnings power.

While the tax cut was obviously a one-off development that helped adjust estimates higher, the other beneficial sector trends still hold true and should have been showing up positive earnings estimates for the current period. But that did not happen, which is a disappointing development in an otherwise strong earnings backdrop, and one that MPCA will monitor in the weeks and months ahead.

Information from Zacks Investment Research was used in compiling this report.