Another Day, Another Trade War

After a rough May for the markets, we’re happy to see June get here. We started May with hitting a new market high, and then came the tweets and another round of “he said, he said” with China. I don’t think anyone disagrees with the need to deal with China stealing our technology and demanding joint ventures for in-country selling, plus the massive deficit we have with them. The main question is how do you fix that? Since Congress can’t agree to solve anything (like, umm Social Security or Medicare), apparently the only tool Trump has is tariffs (or so he thinks). He likes tariffs in the first place, although somewhat mistaken on their effects and who pays them. That aside, here we are, but just when we thought all the focus was on China, Trump turned his tariff sword south of the border. Even after negotiating NAFTA 2 (USMCA), Trump decided to levy a 5% tariff on Mexican goods in order to help solve the border issue. That’s like using a chainsaw for brain surgery. Maybe not the level of precision we should be looking for!

Moving on from the political side of the markets, we have been talking about being late in the business and market cycles. We’ll expand here on a few things that concern us, but keep in mind one data point doesn’t make us run for shelter. Right now, there are more things that concern us than get us excited about the near-term.

Below is a historical view of the 10-year / 3-month treasury spread. The gray shaded areas are recessions. As you can see, over the last 20 years, each recession has been preceded by an “inverted yield curve,” which means short-term rates are higher than long-term rates. In this case, the 3-month is higher than the 10-year. There is one caveat, the 10-year / 2-year is not inverted at this time. I am just showing this because it is something that is a concern. If the 2-year were to invert at the same time as the 3-month, that would be a much bigger deal.

That being said, below is a chart of the Fed Funds futures. Say what? To explain, it essentially shows us where the future rates are likely to be. Right now, it shows that a 50-basis point cut (0.5%) to the Fed Funds rate. What does that mean? If you remember last year, I was screaming (ok, virtually) that the Fed should stop raising rates, which they stuck to in December. The markets were already saying they had gone far enough, but in typical Fed style, they were looking in the rearview mirror to tell them what their policy response should be. Forever we have said that the Fed drives the car into the ditch, only to get it pulled out and drive into the other ditch. Translation, it overstimulates the market by keeping rates too low (0% Fed Funds from 2009 to 2016). Now they have raised rates too high, and need to lower them, but not before it’s too late to cause the next business cycle downturn. 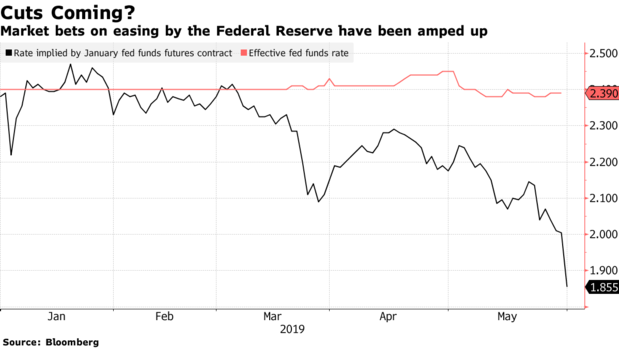 Finally, to show a short-term positive, the chart below from Ned Davis Research shows that we are very oversold and likely don’t have much further down before the market shows some kind of rally. Since we’re investors and not traders, we use this as more evidence of where the market is. Ultimately, we think economics drive the markets over the longer-term.

So while we are still cautiously optimistic, we realize that we are getting closer to the end of the cycle and our number one job now is to protect your wealth should a major downturn happen.  We will continue to stay vigilant and if we need to we will take protective measures.