A Trip Around the Markets

The hardest part about investing is we as humans are in the here and now, and the markets are looking out 6-9 months in the future. If we as investors are looking at the newspaper (digital or print), we are reading yesterday’s news. We need to be looking out into the future to see how things are going to be, not just what they are. That’s hard and the truth is nobody knows the future. The market doesn’t know the future either, but it represents the collective “wisdom” of all investors putting their hard earned money on the line as to whether things will be better or worse in the months and years ahead. We’ve said this before and I’ll say it again, Warren Buffet is the supreme example of someone looking out in the future. He believes that his companies will grow and have more earnings in the future than they do today. Now, I might argue that he has a time horizon that is longer than most of ours (as he holds stocks forever). Most of us don’t have “forever,” but also we have to recognize that there are business cycles and good times to own stocks and not so good times.

Warren Buffett’s way is one way to invest (buy and hold), which we totally agree with except for two things. The first is that most people let emotions get in the way of good decisions and that typically happens when the markets are going down. Nobody cares if the market goes up 50%, but going down 50% is a different deal. We recognize that’s when the wheels fall off the bus and we all go into preservation mode. Completely normal and understandable. The second is that we don’t all have the resources of Warren Buffett who can withstand temporary dislocations to his portfolios. Our needs can be more immediate, and the need to draw funds when that buy and hold strategy has our account temporarily in the tank can be detrimental. We need to smooth the ride from both an emotional and practical standpoint. These are the reasons why we put our model in place after 2008 (we had a much simpler version before that), as it gives us hard data behind how the markets are acting.

So let’s go through a few things. Instead of my often cryptic between the lines writing, we can look at some hard data and draw some good conclusions (hopefully). I will also have one rant at the end of our piece today. It’s one that I have said before, but I will hopefully show you why FED intervention is not a good thing.

If you look at the chart of the S&P 500 below, you will see that the markets have not gone anywhere since June 8th. There have been a couple scary drops and some recoveries as well. But you can see that by some measures the market is extended. On others, not quite as much. Does that mean the markets will go down or up? Hard to tell by this chart alone. Let’s look at some other charts. 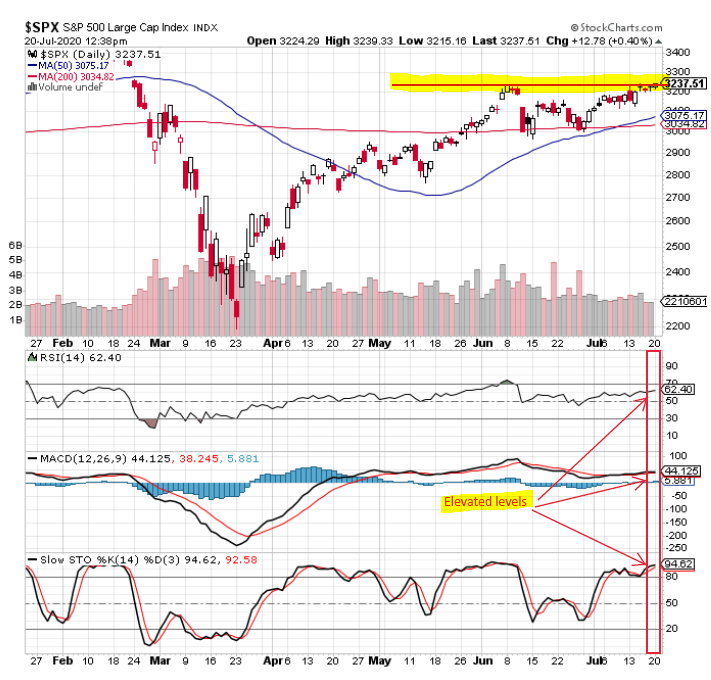 The next chart is the Russell 2000 index of small companies. If you look at the oscillators below the chart, it looks like those are rolling over from high levels and starting to head down. Does that mean it can’t reverse up? Not at all. Just another data point. Oddly enough, the Russell 2000 peaked on June 8th and has basically been in a sideways trend. 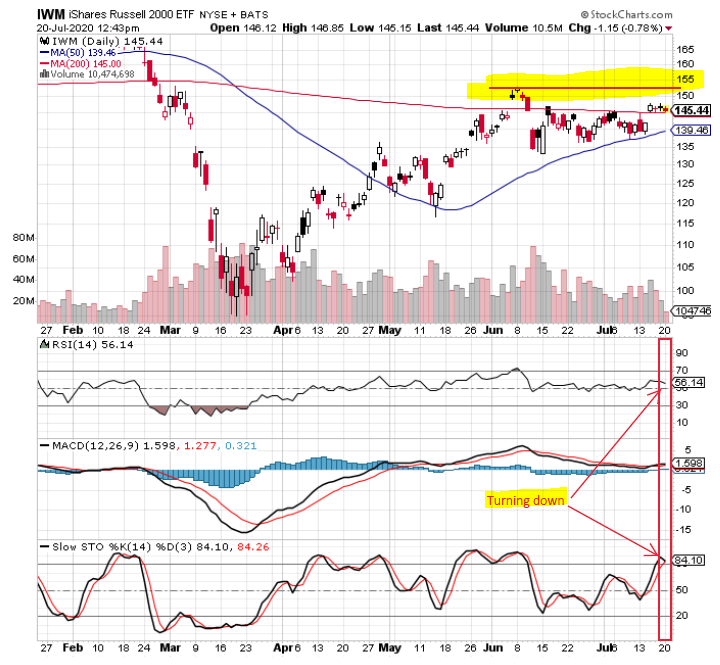 So is June 8th just a coincidence or is there something more to it? Could it be the pause that refreshes? There are two ways the market can work off overbought conditions. One way is to sell off and the other way is to work sideways.

Is it possible that the market is concerned that we are having a second wave with the Coronavirus? Look at the chart below. It was around that June 8th time that new cases started to increase. Many states have halted reopenings, while others are looking at runaway cases and contemplating whether to shut things down again. So this could be part of the market’s problems. If you have been out lately, you have likely noticed increased traffic. Restaurants are as busy as they can be with social distancing and the 6 foot rule. We were in Friday Harbor on Saturday and there was a 45 minute wait to get into the restaurant. Shout out to my wife who made reservations in advance!! 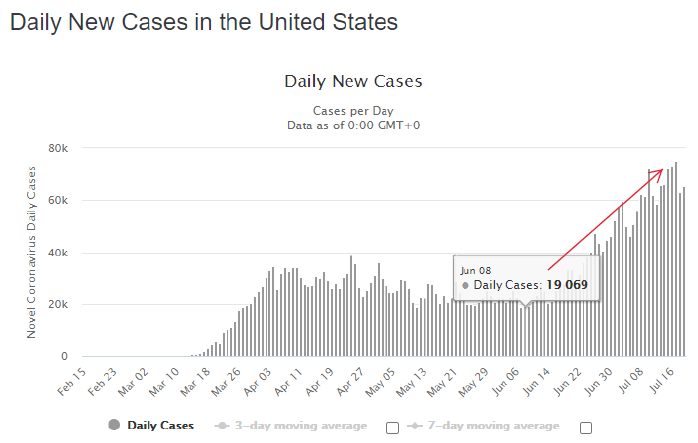 Perhaps it’s something else. Now, it’s no big secret that I think the FED’s handling of the last 20+ years has been a bit like the Keystone Cops (for those of you too young, Google it). They have been running around trying to put out one fire after another. Can I also say that they may have contributed to some of those fires getting out of control?

I’ll give you a flying analogy.  When you are on final approach and you are in the clouds (meaning you can’t see where you are going), you fly your instruments that tell you where the runway is (left/right and up/down). A very common thing to do (not that I have done this J) is to make a correction to where you need to be, but mistakenly overfly the plane so that you are chasing the needles. 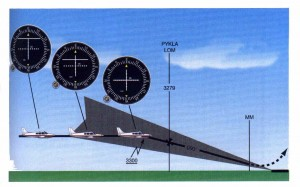 Is it a coincidence that the FED balance sheet increased about $3 trillion from the start of the pandemic, and since June 3rd it has actually gone down? Is it possible the FED knows that it has pumped too much money into the system and now is quietly trying to take it out? Like nobody will know, right? That’s the thing, the markets know.

So now we have somewhere around $7-10 trillion put into the system to help individuals and businesses affected by the virus get through with the hopes of reopening and getting back to something like life as normal.

Except the extra $600 a month unemployment benefit is running out, the PPP has been distributed and likely used, and now we have Congress looking at another spending bill (and Nancy Pelosi said $1.4 trillion isn’t enough). All the while the FED is trying to cut it’s balance sheet (while talking down interest rates), and in certain states it looks like the reopening is not going so well.

No wonder the markets are so confused. Valuations are so high that most analysts are now using 2021 earnings estimates (which almost always turn out too high) and we haven’t seen how many companies will be able to reopen and be profitable under these new conditions.

I guess that explains why our model is still very conservative and why we have as much “dry powder” as we do. All of us are naturally optimistic, but our view is that this hasn’t all played out and there are still some shoes to fall. We will be happy to start taking on more risk as we see some of the clouds lift on the horizon (again, we are looking out into the future, as imperfect as that is).

So finally, my rant. It is related to what I have just been talking about and something I have discussed in the past. Zombie companies. You know the companies that are still in business, but can’t pay their bills and keep getting further in debt. The rant is that the FED, by lowering rates, allows these businesses to continue longer than they should, even though they are dead businesses. And furthermore (here comes the rant), the very management that got them into their predicament are the ones that are reaping the rewards for doing such a poor job running the company. If you want to read the piece, it is here. For those of you that want the short and sweet, I’ll give you the highlights (or lowlights) here.

Low interest rates have allowed these companies to stay in business longer than they should have and that’s bad. What’s worse is the self-dealing bonuses they gave themselves while leading their companies to bankruptcy. This is one of the bad parts of a “free market” economy, if that’s what you want to call it (yes, there are bad parts in an overall good system). As investors – meaning owners of companies (fortunately none of these) – we need to be aware of leadership and make sure these executives (that arguably make too much money in the first place) are held accountable not just for the company they recently drove into the ground but the next company they want to be at the helm of. Leadership matters on so many levels.

I don’t know about anyone else, but I feel better after getting that off my chest. I hope I didn’t offend anyone along the way.